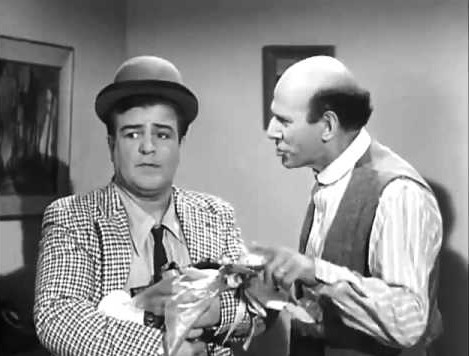 Pots and Pans – The Abbott and Costello Show, season 1, episode 9

Lou Costello has a new job, selling aluminum pots and pans — and he plans to cook dinner at Mr. Fields’ apartment with them to demonstrate them.

Soon afterward, Bud and Lou con the poor food vendor, Mr. Bacciagalupe (Joe Kirk), out of some tomatoes, and start a running gag with throwing tomatoes at Officer Mike  (Gordon Jones)– first by Lou, then Bud, then Officer Mike does it to Mr. Bacciagalupe. At the apartment, Bud has gotten a live duck for the roast dinner, for Lou to “dress” it … only for Bud informing him that the duck has to be killed, and to keep the feathers, since they’re “down” leading into their “down off a duck” routine.

Lou invites Hillary Brooke to the dinner, and demonstrates his lack of knowledge of cooking to Mr. Fields, and goes into the kitchen to prepare the dinner — while entertaining the duck in the kitchen sink. As he’s preparing the stuffing, the recipe book’s page turns, and he starts adding yeast to his dish — with the duck’s help.

Soon, the guests arrive, and Mr. Fields decides to help in the kitchen, and suggests that Lou adds some spaghetti. Lou clowns around with the spaghetti, and goes to grate Mr. Fields’ imported  cheese — but grates a bar of soap instead. Lou then serves the spaghetti dinner, and goes to retrieve the chicken — which has grossly inflated due to the yeast. The dinner guests comment on it, with soap bubbles floating out of their mouths.

When Lou goes to carve the bird, it floats up into the air, and Lou clowns around trying to get it down, standing on the table, and stepping into a large pile of dough, finally succeeding at shooting it down with a sling shot, causing the chicken to come down, with Lou crashing through the kitchen door, falling onto the dinner table, which (being a Murphy bed) collapsing into the wall.

Funny quotes from Pots and Pans – The Abbott and Costello Show

Hillary Brooke: Hello, Louis.
Lou Costello: Hello, Hillary. I came to invite you across the hall to Mr. Fields’ apartment for dinner. I’m going to cook dinner over there. Will you come?
Hillary Brooke: Oh, Louis, I’d love to. How sweet of you. I didn’t know you could cook.
Lou Costello: Oh, sure. Every morning when I get up, I cook coffee in my pajamas.
Hillary Brooke: Not in the coffee pot?

Mr. Fields: That cheese is as old as you are – smell it. [Lou sniffs the cheese] Well?
Lou Costello: It’s older.