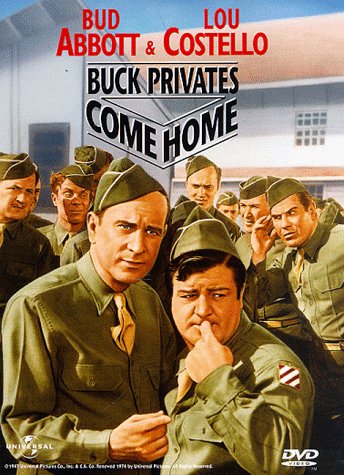 The basic story has Bud and Lou returning home after serving in the Army. Unknown to Bud, Lou’s smuggling home a French orphan. She loves her “Uncle Herbie”, and he can’t bear the though of her living in an orphanage. On the way home, she’s found, and put in the charge of a female Army officer named Sylvia. Bud and Lou want to adopt the little girl, but they aren’t married, and don’t have steady jobs. And Sylvia might marry her boyfriend Tom, if he can only prove the success of a new automobile engine he’s developed.

Buck Privates come home is very fast paced and funny. It’s absolutely hilarious. Especially the running joke of Lou making poor Sergeant Collins life as miserable as a police officer as he did in the Army! It’s frankly one of my favorite Abbott and Costello movies. I hope you enjoy it as well. I rate it a rare 5 stars. Honestly, I can’t see how it could be improved.

In this sequel to 1941’s  Buck Privates,  Bud and Lou are on their way home from the war in Europe (having joined the Army by mistake in the first film).  Lou is smuggling home Evey, an adorable French orphan. When Evey is discovered and scheduled for deportation, the only way Bud and Lou can keep her is to get real jobs, a real home, and a real wife. They seek out Evey’s “Aunt” Sylvia for help, but first, her fiancée needs some quick cash to get his midget-car racer ready for the big race.

Of course, the whole thing ends with Lou in the car, leading the cops on a hilarious chase

Sylvia Hunter: You love your uncle Herbie, don’t you?
Yvonne “Evie” LeBrec: Oh yes, I’d marry him if I was a little bigger and he was a little littler.

Slicker Smith: [referring to Bill and his car] He races midgets.
Herbie Brown: Midgets? Why don’t he race somebody his own size?