Home > Articles > Jack and the Beanstalk

Jack and the Beanstalk 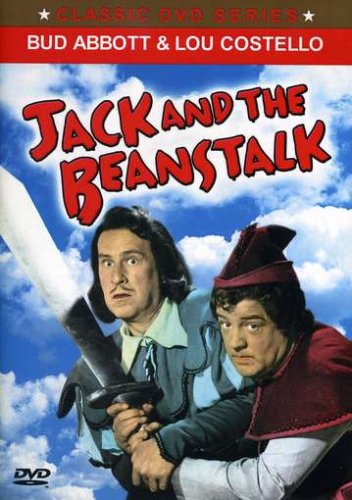 Jack and the Beanstalk is one of the only two films that  Abbott and Costello made in color.   It is a children’s movie that adults can enjoy as well.   The beginning and ending of the movie are filmed in black and white, with Bud and Lou playing their typical characters.  Bud Abbott  bosses around and takes advantage of  Lou Costello. Although that changes slightly at the end of the movie.   Bud having Lou work as a babysitter for an obnoxious child, who hits Lou on the head and launches the main part of the movie, with Lou dreaming in color of the story of  Jack and the Beanstalk.

In his dream, Lou Costello is Jack, who foolishly trades the family cow to the greedy town butcher, Mr. Dinklepuss (Bud Abbott) for a few worthless beans.   True to the story, the beans grow into a magic beanstalk overnight, allowing Lou to climb the beanstalk to rescue the Princess and Prince (typical “star-crossed” romance that slows the plot down slightly) from the evil Giant (by the same actor who earlier was the large beat cop that intimidated Lou in the “waking” world, Buddy Baer).

As you would expect, all ends happily ever after.   The movie, although definitely a children’s movie, is entertaining Abbott and Costello in its’ own right at well.   There are several funny scenes, good verbal jousting between Jack and Mr. Dinklepuss.   Recommended, especially if you have children; my five-year-old son was frightened of the scenes with the giant, but now that he’s 7, he likes the film without reservation.

Editorial review of Abbott and Costello in Jack and the Beanstalk (1952), courtesy of  Amazon.com

Starring  Bud Abbott  Lou Costello  and Buddy Baer  Jack and the Beanstalk features Lou as Jack and Bud as Dinklepuss. The boys are sent by an employment agency to baby-sit an obnoxious kid little sister.  Jack falls asleep reading Jack and the Beanstalk and dreams himself and his friends into the fairy tale ala  The Wizard of Oz. The magical story world is transformed from black and white to color.Jack and the beanstalk is a faithfully rendered version of the fable lovingly re-transferred to capture all of the high definition of the original 35 mm film. Features the song I Fear Nothing and captures all the comic genius of Abbott & Costello at their best.System Requirements: Running Time: 78 minutes

Villager: [the two women watch as Jack climbs the beanstalk, then the villager turns to the tearful mother] Don’t worry, Mrs Strong. He won’t be back.

[first lines]
Donald: Come in. Oh, it’s you. I’m sorry Arthur, I thought it was the babysitter.
Arthur: Just what do you have against babysitters?

Jack (Lou Costello): [singing] I fear nothing when I am in the right / Whoever pushes me around will find me full of fight.

[repeated line]
The Giant: Fee-Fi-Fo-Fum I smell the blood of an Englishman. Be he alive or be he dead, I’ll grind his bones to make my bread.

Jack (Lou Costello): [to Receptionist] I like girls like you, eyes of blue and five feet two.

Chorus: [singing] Jack and the beanstalk we’ll always remember when / He chased up the stalk and killed a giant in his den.
Mr. Dinkelpuss: I managed this boy.

[last lines]
Jack Strong (Lou Costello): [singing] I fear nothing when I do nothing wrong / And so I toddle on my way and sing a merry song.

Trivia for  Abbott and Costello in Jack and the Beanstalk