The 30 Foot Bride of Candy Rock 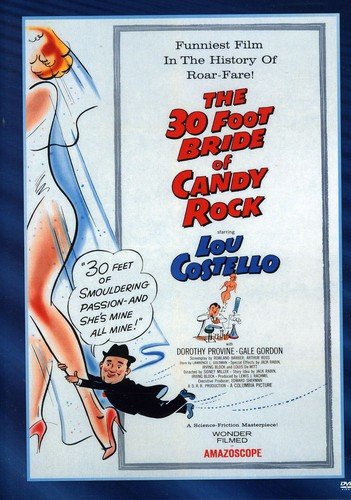 In The 30 Foot Bride of Candy Rock, Lou Costello‘s a frustrated would-be scientist. He’s in love with Emmy Lou, but her Uncle Raven won’t hear of it. Then, she stumbles into a cave with a strange gas …

The 30 Foot Bride of Candy Rock is Lou Costello’s only solo film. Lou was a very funny man, and I really wanted to enjoy it. But, I frankly didn’t. I enjoyed it more than Africa Screams, but that’s a low bar to pass.

Lou Costello plays Artie Pinsetter, the rubbish collector. He has a secret desire to be a great scientist, but he’s insecure. He lives in fear of “Uncle” Raven Rossiter, who runs their small town. But, he’s in love with Raven’s lovely niece, Emmy Lou. And she loves him back. But Uncle Raven won’t hear of her dating a rubbish man! Until Emmy Lou is mysteriously turned into a giant …

So, what’s wrong with The 30 Foot Bride of Candy Rock? Several things. First, Lou’s simply too old to play this type of character. He was 54 at the time, and Dorothy Provine was only 24. He’s supposed to play a young man, trying to prove his worth to Emmy Lou, Uncle Raven, and the world. It simply doesn’t play well.

I also found the conclusion silly, not funny. It’s not that I hated the movie — I didn’t. I did enjoy it, but it’s not a first-class comedy. I only rate it 2.5 stars out of 5.

Be sure to check out the funny movies quotes from The 30 Foot Bride of Candy Rock as well.

Rubbish collector and amateur inventor Artie Pinsetter (Lou Costello) hopes that someday one of his inventions will make him wealthy and important enough for him to marry his sweetheart Emmy Lou (Dorothy Provine). After one of his creations, a portable computer named Max, tells Emmy Lou that Artie cannot marry her, she runs off into a smoky canyon and starts to grow. Artie seeks help from Emmy’s uncle (Gale Gordon) who misunderstands Artie and thinks she is “big” with child. He sends the justice of the peace to marry the couple.

He is also running for governor and does not want the public to know about his niece’s problem. If that is not enough, the army believes her to be a giant Martian and sends out troops to destroy her. Empowered by her new height, Emmy rampages through town and takes command of her life. Max is also able to change the space-time continuum helping Artie escape the army, which is chasing him while dressed as confederates and then cavemen. Lou Costello made this parody of The Attack of the 50-Foot Woman without his partner Bud Abbott right before Costello died. –Margaret Griffis