Abbott and Costello in Hollywood (1945) 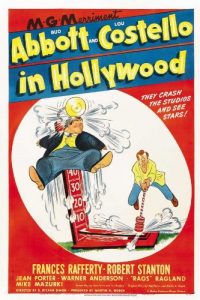 Abbott and Costello in Hollywood is classic Abbott and Costello in the very best sense.   The movie begins with Bud Abbott, who has gone to barber school, conning Lou Costello out of his money.  Bud is giving Lou lessons on how to shave a customer, using a balloon with lather as a shaving dummy.   Bud is using the handle to ‘shave’ the balloon, while making sure that Lou is using the blade, so that Lou is constantly popping the balloon, and having to keep paying Bud for more shaving lessons.   Lou eventually gets wise, and decides to finally ‘graduate’ – unfortunately, he’s moved the balloon onto the heat radiator.

As funny as this is, it’s only the introduction, setting the characters of Bud and Lou for the movie.   They work as a barber and shoe shine respectively, outside of a Hollywood talent agency.   After a young singer (Bob Haymes) has his chance at stardom taken away by a vain Hollywood actor, Bud and Lou decide to become the young man’s talent agents – to help him get the role back, as well as making “easy money” as talent agents. 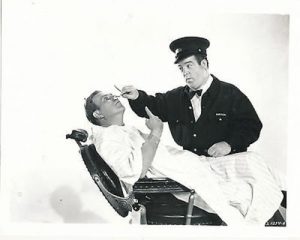 A very funny movie, with several excellent routines (in addition to shaving the balloon, Bud and Lou battle insomnia, and a very classic routine where Lou can’t hear Bud’s instructions while wearing earplugs).

Trivia for Abbott and Costello in Hollywood (1945)

Funny movie quotes from Abbott and Costello in Hollywood 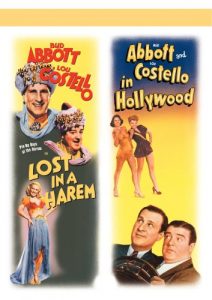 Mr. Burvis, Ruthie’s Boss: [reacting to a verbal spat between two of his manicurists] My shop is for hair cutting, not hair pulling!

Buzz Kurtis (Bud Abbott): Now, listen. This is even better than you getting socked. You’re dead!
Abercrombie (Lou Costello): If I’m dead, then … then why am I so hungry?