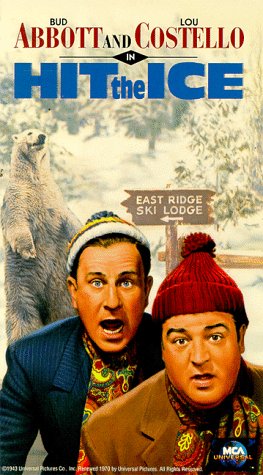 In  Hit the Ice,  Bud Abbott  and  Lou Costello  are  sidewalk photographers. Next, they get mixed up with bank robbers. After, they wind up at a ski resort. As you can imagine, various hijinks ensue. This film has the trademark  Abbott and Costello  verbal humor, and plenty of visual comedy, too. Lou’s mishaps on a skating rink are amusing, and a  frantic chase finale has Lou turning into a giant snowball!  The supporting cast features Sheldon Leonard as the criminal mastermind. Also, fans of ’40s music will enjoy vocalist Ginny Simms.

Funny movie quotes from Abbott and Costello’s  Hit the Ice

Weejie “Tubby” McCoy (Lou Costello): [moaning] Oh I was shot, somebody stabbed me.

Flash Fulton (Bud Abbott): This bank’s been stuck up.
Weejie “Tubby” McCoy (Lou Costello): What’ve they got to be stuck up for? They’re no better than any other bank.

Trivia for Abbott and Costello’s  Hit the Ice