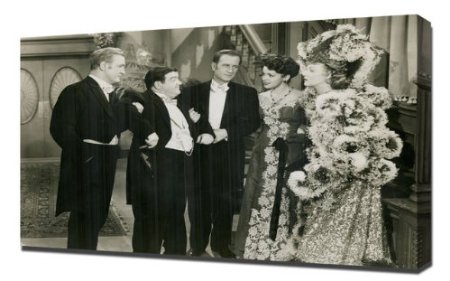 In this zany Abbott and Costello musical comedy, Bud Abbott plays a ham actor and Lou Costello, his dimwitted assistant on the Mississippi showboat, the River Queen. When the boat docks in St. Louis, Bud and Lou try to rescue Captain Sam from a poker game with three card sharks, but they are too late. The gamblers win a controlling interest in the River Queen and — to Captain Sam’s dismay — set up a crooked casino operation on board. Before ridding the showboat of the villains, Abbott and Costello perform several of their most famous bits, including the complete rendition of their hysterical Who’s on First? routine, which has become one of the most popular comedy moments ever captured on film.

Trivia about Abbott and Costello’s The Naughty Nineties: