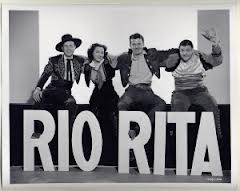 Doc (Bud Abbott) and Wishy (Lou Costello) accidentally find their way to Vista Del Rio. In order to afford their way back to New York, they start working as hotel detectives for the lovely Rita (Kathryn Grayson), who’s in a romantic triangle with Ricardo (John Carroll) and Lucette (Patricia Dane)  – and in the way of Nazi saboteurs who plan to pass on a coded message during Ricardo’s nationwide broadcast during the three day festival there.

The good news about Rio Rita is that the comedy is fast-paced — except when the romantic leads starting singing.  They both have lovely voices, but many of the music numbers are either too long, or unnecessary. That’s is a pity, since both John Carroll and Kathryn Grayson are worth listening to …. But this is an Abbott and Costello movie, after all …

Rio Rita begins with Doc (Bud Abbott) and Wishy (Lou Costello) working in a pet shop. They’re trying to earn enough money to get back to New York.  After some funny banter in a pet shop, they’re being fired and Lou damaging the shop. They decide to get a ride back to New York by stowing away in the trunk of a car with New York license plate.  However, the car is owned by Ricardo (John Carroll). He’s the singing romantic love interest of the story. And, he’s heading further south to a three-day fiesta in his home town of Vista Del Rio. That’s where he’ll do his weekly national radio show.

In Vista Del Rio the audience meets the lovely, singing Rita (Kathryn Grayson). She had a crush on Ricardo when they were both “children. That was 10 years ago, and now she runs her father’s hotel.  In Vista Del Rio, however, the audience becomes aware of a small group of Nazi saboteurs working at the hotel. They have just received a shipment of small radio receivers -isguised as fruit. This came from a U-boat, that they plan to pass on to their fellow spies …. As a way of sending them coded messages.

Ricardo has his car taken for service. This leads to an extended scene with Abbott and Costello trying to get out of the elevated car on the edge of a cliff, rotating it via controls, etc. And finally using it to escape from the returning service station attendants. It’s supposed to be one of the comedy highlights of the movie. But I frankly find the routine of Abbott trying to get Costello off the roof — and then trading places with him — to be funnier.

Back at the ranch

Back at the ranch, there’s a romantic/musical interlude. Rita plays one of Ricardo’s records, and starts singing along, as he happens to ride along on his horse.  He doesn’t remember her from 10 years ago. This leads to hurt feelings, and some of the ongoing angst between the two romantic leads. This goes on through the movie. Thankfully, they’re interrupted by the singing Rangers, who’s singing gets repeated throughout the movie via radio

Abbott and Costello have made their way to the hotel. There they see the box of “apples” belonging to the Nazi saboteurs … And since they’re hungry, they help themselves – with the classic “I’ve got twenty, too” routine. Until they realize that aren’t edible, and throw them away. Where they’re eaten by a dog and some burros. Which leads to both some comedy and a rescue scene later on…

But in the meanwhile, Bud and Lou are still hungry, and they walk past the preparations for the festival, where Rita finds the lovely Lucette making time with Ricardo.   After some banter between the two females, Bud and Lou are talking about mirages as they imagine food, and some waiters lay out a table of food for the festival   — courtesy of the generous Rita — which Lou takes as his personal mirage, and starts eating … and soon has Bud joining him, leading to their classic “I bet you’re not here” routine.

The Nazis realize that their radios are missing, and start a very funny chase scene, chasing after Bud and Lou, who only get out of trouble when the kind-hearted Rita hires Abbott and Costello as the new hotel detectives.   And another romantic misunderstanding between Ricardo and Rita follows, with Bud and Lou determined to keep Lucette away from Ricardo — by having Lou romance Lucette.

After some horsing around as house detectives, Lou walks in to Lucette’s room. She initially mistakes him for for the bell boy. After realizing that he’s not, she chases him out of the room. Where he sits next to the dog that swallowed the radio, and Lou mistakes him for a talking dog. This leads into a routine with Bud mistaking the voice of the “talking dog” for Lou when he wants to borrow a couple of dollars.

Later that night, the fiesta is underway … with another song number from Ricardo. Abbott and Costello decide to buy Lucette off with a small bankroll, which they decide to double with a game of “chance” that they they try to cheat at … only to lose. And another dance routine. And finally Bud and Lou try to buy off Lucette, in an extended scene that ends with Lucette walking off with their money, and with them getting drunk on “cactus juice”. Followed by another song by Rita.   Back to Bud and Lou, a member of the secret service (Lucette’s partner) passes a code book to them before he’s shot and killed.   Bud and Lou exit out of the window, just before the hotel management (including the Nazi spies) come in.

Romance and the Nazi spies

And more romantic angst between Ricardo and Rita … As Lucette seeks to use Ricardo as her cover, with Rita seeing them kiss. Lou is left alone as Bud goes out on a date with one of the hotel guests. This leaves Lucette to try and get the code book from a sleeping Lou. It’s a funny scene, that ends with Lucette leaving empty handed. Ricardo comes in afterward, and tells Lou to get the Rangers to arrest the Nazi spies.   The cabs are already occupied, and Lou goes to tell the (Nazi) manager. He arranges to have two of his goons to “take him for a ride” which results in another chase scene.

Lou falls into the laundry chute and ends up in an oversize washing machine that the hotel supposedly uses. Another giant prop comedy scene, with Bud trying to help but being more of a hindrance.   Eventually, the pair are caught by the Nazis, tied to chairs and left to die with a time bomb.

Throughout the movie, Lou has been stupid, but here he shows his cleverness – he irritates the Nazi guard, Jake, into beating him before leaving — and in the struggle, puts the small time bomb into Jake’s back pocket. In the meantime, the spies capture Ricardo and Rita, to get the code book and force Ricardo to make his national broadcast — with the spies reading the commercials, and inserting their code phrases to pass on to their fellow traitors across the nation.

To the rescue comes the Ranger song again, “sung” by the burros who swallowed the radios earlier in the movie, causing the Nazis to flee. Complete with the Nazi spy Jake, causing the movie to end with a “bang”.

Overall, I enjoyed Rio Rita. But I felt that the the movie dragged on during the too-frequent musical numbers – I only rate it 3 out of 5 stars. I frankly enjoyed a Red Skelton film with a similar premise (Ship Ahoy) much more.

It’s fiesta time in Vista Del Rio, and that means much musical celebration. It’s also a time of global war. So, in the updated plot of this exuberant World War II-era remake of the 1929 Wheeler and Woolsey romp, that means little Vista Del Rio is a jalapeÃ±o  hotbed of Axis spies. The agents intend to use a fiesta radio show to send a coded message, a scheme that may be scrambled silly when stumble bums Doc and Wishy stumble onto it. Bud Abbott and Lou Costello play the inept duo in this musical comedy that – from riffing on the word “Pekingese” to Lou’s hunger-fueled food mirage (tastes like chicken!) to his loopy spin within an over  washing machine – has the famed funnymen fracturing any situation into goofy glee. Enjoy!