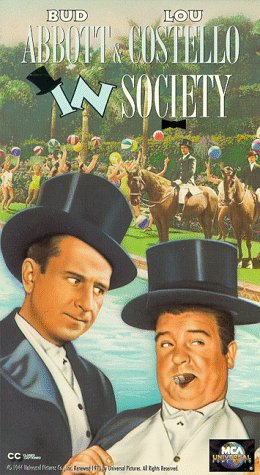 Bud Abbott and Lou Costello play the part of inept plumbers, who are hired to repair a leaky faucet at a mansion, shortly before a costume ball. After a hilarious sequence destroying the bathroom through their incompetence, Abbott and Costello are (mistakenly) invited to a society weekend, where a villain tries to enlist their help in stealing a valuable painting, “The Plunger.” This leads into a comedic chase scene at the end, where all gets resolved.

One of their finest movies, with the destruction of the bathroom being one of the funniest moments on film. It also features Abbott and Costello’s famous “Bagel Street” routine, also known as “Susquehannah Hat Company“, where Lou is trying to deliver some hats – but everyone he meets beats him up and ruins one of his hats – a truly hilarious routine.

Trivia about Abbott and Costello’s In Society: