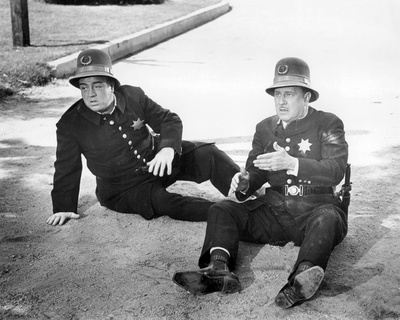 Abbott and Costello meet the Keystone Kops … a little bit.  In actuality, it has Bud Abbott and Lou Costello, set in the early days of the film industry. Lou Costello impersonates one of the Keystone Kops. There is a long, funny chase scene at the end with, indeed, the Keystone Kops’ “assistance”. But we should start at the beginning of the movie. Willie Piper (Lou Costello) is weeping profusely at a movie theater. He’s watching the chase over the ice floes from Uncle Tom’s Cabin. The theater workers promptly throw him out for bothering the other patrons.

He goes back in …. And they throw him back out. He’s grabbing his aunt’s money ($5,000) that he needs to deposit in the bank. But his friend Harry Pierce (Bud Abbott) convinces him instead to use the money to purchase a film studio.  After a very funny bit where Bud gets beaten up by a passerby for threatening to beat his “son”.  But when Bud tries to reverse roles, nothing happens. And then Bud gets beaten up again.

Soon, they’re meeting with Joe Gorman (Fred Clark, remembered for his role on the Beverly Hillbillies) and his partner Leota Van Cleef (Lynn Bari, the “girl with the million dollar figure”) who promptly bilk them out of their money and leave town — heading for California. An

Walking to California along train tracks, Abbott and Costello have one close call with a train. Only to have a second one! Lou gets his foot stuck in the track with another train coming. This leaves Bud to think that Lou’s been hit by a train. He begins carrying the “injured” Lou …. Who milks this for all that it’s worth.  After a run-in with some hobos (and a very funny routine with a groundhog that has to be seen to be appreciated), Bud and Lou have their clothes stolen while they sleep.  And after wagering a trip on board a train, the duo make their way to Hollywood.

At the same time, movie producer Rudolph Snavely (played by Frank Wilcox hired “Toumanoff”.   He begins directing silent motion pictures.  Abbott and Costello finally make it to Hollywood. There, they think they see a horse-drawn wagon driven by an old man that they met along the way. But it’s actually a pair of actors filming a Western scene …. Where Indians are about to attack! Abbott and Costello turn this into a madcap chase. And that leads them to be hired as new stuntmen working at Mr. Snavely’s film studio, where they’ll be working for Toumanoff!

At the studio, Mr. Snavely gives the boys his promise to do all that he can to find Gorman. And, to see that their money is returned to them.  Soon, Lou will be acting as a double for Lynn Bari in an airplane scene. Where Gorman/Toumanoff’s assistant has rigged the plane to fall apart. As well as “accidentally” put live ammunition in the other airplane’s guns. It’s a very funny scene, well worth watching, as Bud and Lou manage to survive. They finally jump from the plane in the only parachute, with Lou dangling from Bud’s legs …. Fnally ripping his pants off and falling safely into the water below. And then rides a submarine to shore.

The next day, watching the footage from the airplane, Mr. Snavely recognizes Bud and Lou’s comedic potential, and decides to make them the studio’s newest comedy team.  He also lets “Toumanoff” know that he realizes that he’s actually con man Joe Gorman. Then, he arranges for Gorman’s victims to be repaid from “Toumanoff’s” salary. He wants “Toumanoff” to be Pierce & Piper’s director.  However, Abbott and Costello realize that “Toumanoff” is actually Joe Gorman — but don’t know about Snavely’s agreement with him.

In a very funny routine, Lou dresses as a Keystone Kop while Bud dresses as a burglar to break into “Toumanoff’s” home and search for evidence that he really is Gorman.  However, a real thief has already broken in. There’s a wonderful sequence of mistaken identities as a real police office is mistaken for Lou while the burglar is mistaken for Bud. With escalating speed and building to a comedy crescendo.

Soon enough, unfortunately, “Toumanoff’s” right hand man blackmails him into stealing $75,000 from Snavely’s safe. This forces him back into a life of crime — and safecracking.  Bud and Lou walk in on them, dressed in Keystone Kops outfits, and chase after Gorman.  They enlist the help of the Keystone Kops, who they have mistaken for real police officers.

The film ends with a truly madcap chase scene with Abbott and Costello, the Keystone Kops, and Snavely chasing after them.  I’ve never been a fan of the Keystone Kops, but the chase scene here is truly laugh out loud funny. There are many great comedy moments that need to be seen to be appreciated.  At the end, the villains are apprehended, and Mr. Snavely’s money is rescued. Until the wind from an airplane propeller blows it all over.

I can truly say that I truly enjoyed watching  Abbott and Costello Meet the Keystone Kops. I rate it a very solid 4 stars out of 5.

Trivia for  Abbott and Costello Meet the Keystone Kops