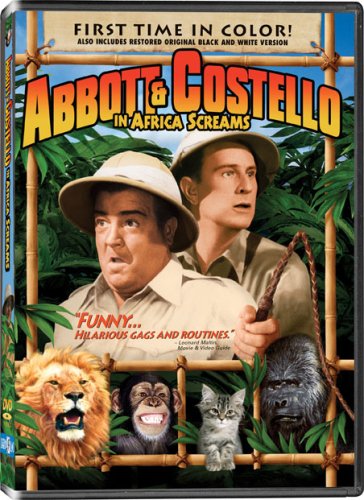 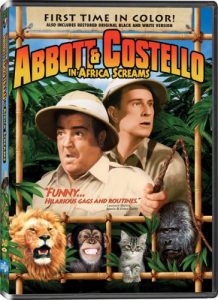 Abbott and Costello’s movie, Africa Screams, is at best a mixed bag.  The basic plot has Bud Abbott and Lou Costello, working as book sellers, conniving their way onto a trip to Africa, where Hillary Brooke is looking for diamonds — and is willing to sell Lou to a hungry witchdoctor.

The bad news is, both Bud and Lou act totally out of character at different times.  Bud actively tries to sell his buddy Lou to the cannibalistic witch doctor for a meal.  Bud often tries to fleece Lou in other movies, but there’s a bond of friendship between them that’s missing in this film.  Likewise, Lou tries to put on airs and impersonate famous big game hunter Frank Buck — in front of Frank Buck; and later do the same routine in front of Clyde Beatty.  It’s totally out of character for Lou — although it would have worked for Bud.

There are individual moments and scenes that are funny, but on the whole the film falls flat.

Abbott and Costello try to pass themselves off as some of the world’s leading African safari hunters, when in reality they’d be lucky to find Africa on a globe. Their tales of bravado are overheard by diamond thieves who take them as their guides on a secret expedition into the heart of Africa. Their only hope is that Africa is no match for their comedic timing. Expertly restored and in color for the first time, this wonderful family romp of a movie goes through jungles filled with lions, monkeys and even a giant ape!

Stanley Livington (Lou Costello): That’s the kind of girl I dream about. But you should see the ones I get.

Buzz Johnson (Bud Abbott): [sees Harry with a glass of water] Where’re you going with the water?
Harry (Joe Besser): Oh my tent’s on fire!

[first lines] Stanley Livington (Lou Costello): Stay right where you are. Don’t move, stay there now. Steady. Now sit up. Sit up. Sit up you. Up you fool. Up. Sit up I said. Sit up. Up.

Buzz Johnson (Bud Abbott): [to Diana] Allow me to introduce Stanley Livington, one of the world’s greatest wild game hunters.

Stanley Livington (Lou Costello): Listen boss, I’m not going along. You’ve got no right to put me in a thing like that. You’re always putting me right in the middle
Buzz Johnson (Bud Abbott): Don’t tell me that. Don’t you give me that. No arguments.

Buzz Johnson (Bud Abbott): [to Stanley] I’m going to make a hero out of you whether you like it or not.

Buzz Johnson (Bud Abbott): [to Stanley] I’m going into the cage and you behave yourself. I can’t understand why he gets so scared.

Stanley Livington (Lou Costello): I’m not afraid of nothing . Not even you. I’m a pretty brave kid. I don’t care about kittens. I don’t care how big the kittens are.

Stanley Livington (Lou Costello): I thought that you were… Buzz, I’m paralysed.

Interpreter: [to Diana] The chief has a sweet tooth for the little fat man.

Boots Wilson: [to Grappler] I’ll hit you harder than Louis ever did.