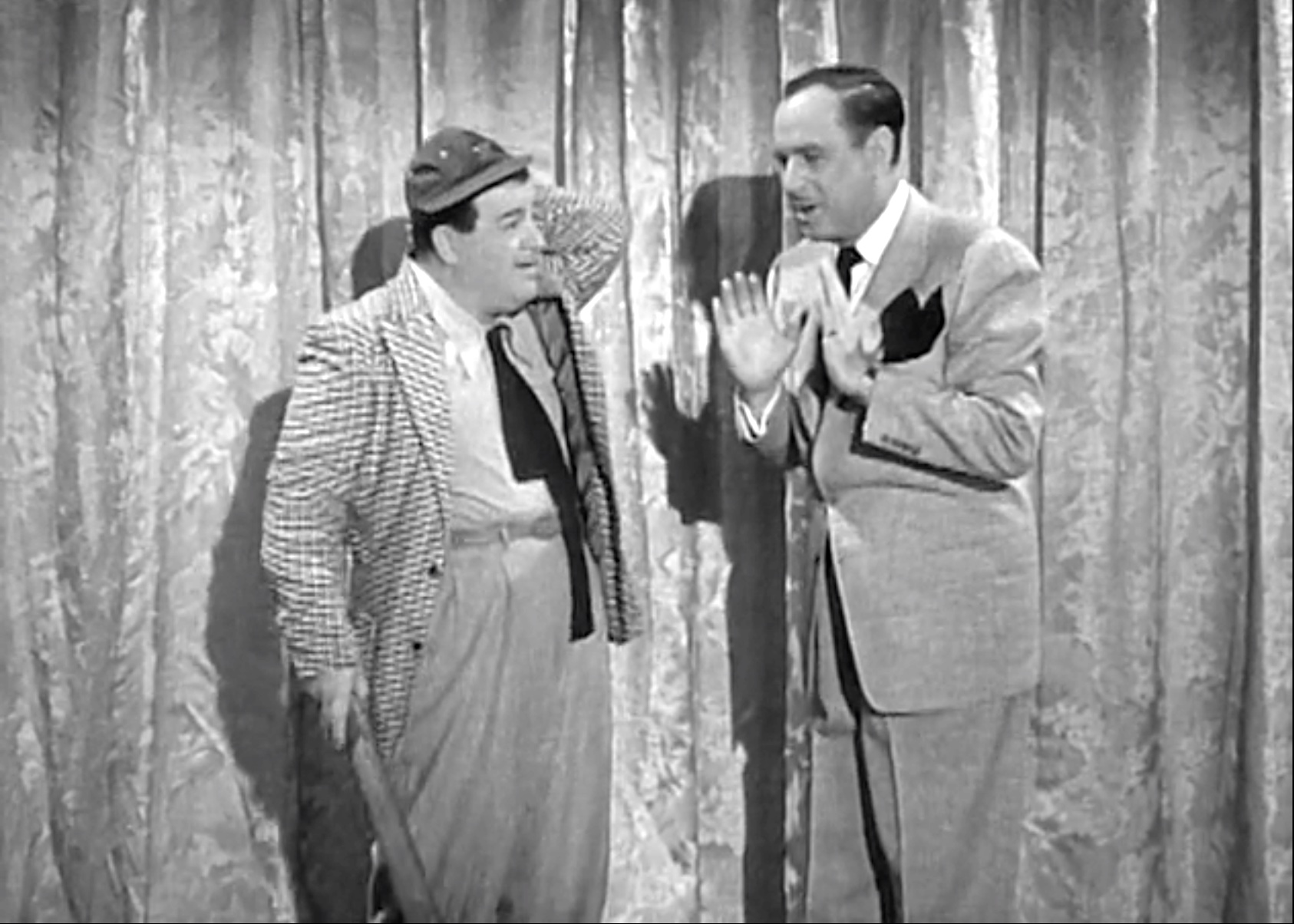 The Actors Home – The Abbott and Costello Show season 1

The Actors Home – Mr. Bacciagalupe asks Lou to watch his ice cream stand. Later, while the boys are selling newspapers, a philanthropist gives them two five hundred dollar bills. Assuming they are fake, Bud tears up the money. When he learns the money was real, he loses is mind and gets hauled off to the Retired Actor’s Home. There, Bud and Lou perform their classic Who’s on First? skit.

Act I – The Actors Home

The Actor’s Home begins with Lou pressing Bud’s pants, while Bud plays a game of chess with Mr. Fields. Burning Bud’s pants in the process. Then, Mr. Bacciagalupe asks Lou to watch his ice cream stand for an hour. Stinky gets upset with him when he won’t give him any free ice cream. Then two pretty young ladies come by, and sweet talk Lou. The two girls fight over who’ll pay for it, until Lou says he doesn’t care who pays for it. So, they tell him to pay for it!

Lou moves the cart to the park, where Bud’s offended that he can’t get any free ice cream. But Stinky sneaks by, and puts limburger cheese in the cart! And a lady comes by, wanting five cents of ice cream for a party of thirty that she’s throwing. And Lou needs a nose plug because of the stinky cheese. Lou throws a slice of limburger at Stinky, but Mr. Bacciagalupe comes by. He and Lou open the cart, and faint from the stench of the cheese!

Next, Bud has Lou selling newspapers to raise money. A man comes by, and gives Lou 500 dollars! Bud comes by, and he gets $500 dollars too! But then, men come by from the retired actors home, and take the man back! However, it’s a case of mistaken identity …. But Bud’s already torn up the $500 bills! And he’s on the verge of cracking up, when he finds out it was real!

Lou actually comes out on stage by himself, since Bud’s at the Retired Actors Home. The scene shifts there, where Bud wants Lou to help him put on a show for the actors. Lou runs into a pair of the retired actors, who show off juggling and a magic trick respectively. While Lou waits for Bud, two actors practice with an imaginary baseball. And Lou gets into the act. And knocks the imaginary ball through a window, breaking it!

Next, Lou and Bud are on stage at the Retired Actors Home. And, the audience asks for a baseball skit. So, they lead into a rendition of their classic who’s on first? sketch.

The Actors Home is available to watch on Amazon Prime and Tubi TV.