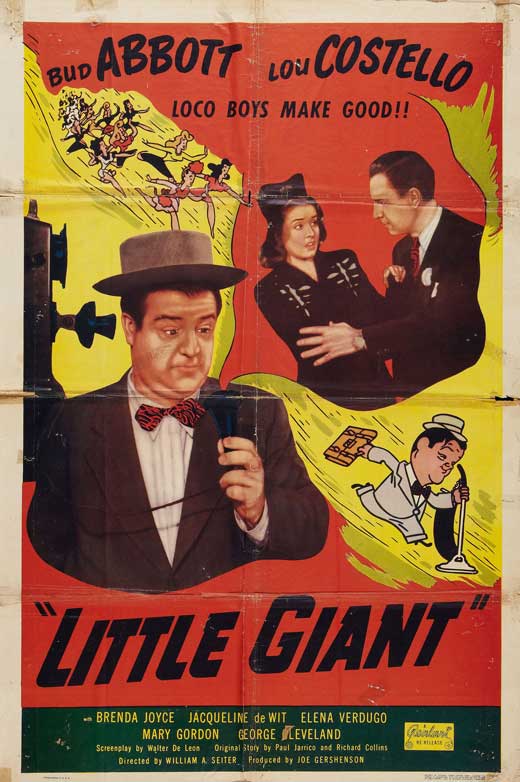 Little Giant was an enormous change for both Bud Abbott and Lou Costello. It is different from most of their comedies in several respects – Abbott and Costello are not a team, indeed are not even friends. Rather than relying on gags and verbal humor, it is a situational comedy, with an accent on physical humor. Although a comedy, it is much deeper than their standard comedies, with Lou Costello playing a character who tugs at your heart strings – and tugs hard.

In  Little Giant, Lou Costello plays Benny Miller, a country bumpkin who has been taking a correspondence course and, upon finishing, leaves his mom and head off for the city to make his fortune. He finds a job selling ‘Little Giant’ vacuum cleaners for Eddie L. Morrison (a mean office manager, played to the hilt by Bud Abbott in a very unsympathetic role). Benny is a failure, until the other people at the office, making fun of Benny, convince him that he can read minds; armed with his new ‘power,’ Benny becomes a super salesman.

He later realizes that the other salespeople aren’t his friends, and are mocking him, after overhearing them. He goes home, feeling himself a failure, with a bird in a wooden cage for his mother (played by Mary Gordon). On the way, he stops to help a neighbor whose mule-drawn wagon is stuck in the mud. He pushes the cart out of the mud, falling into the mud himself, as the neighbor drives off even a “thank you.” He stands up, covered in mud, holding the broken cage – the bird has escaped. It’s a tear-inducing movie moment.

Surprisingly, who should come to his rescue … Bud Abbott (in a dual role as T. S. Chandler, the cousin of the mean manager), who helps Lou to … well, you’ll need to see the movie yourself – no need to give away everything. 🙂

In summary, this is an excellent movie, highly recommend, with a box of Kleenex nearby. Just remember that it’s not a typical Abbott and Costello comedy.

Benny Miller (Lou Costello): Lady, I come to sell you something you don’t want.
Woman: NO!
[slams the door on him]

Benny Miller (Lou Costello): Do you mind if I have a piece of candy while I wait on you?
Hazel Temple Morrison: Aren’t you worried you’re going to wear your teeth down to the bones?
Benny Miller (Lou Costello): What?
Hazel Temple Morrison: You ate three packages of cracker jacks, two bags of peanuts, one of those red gooey apples on a stick, and three chocolate malted milkshakes.
Benny Miller: And don’t forget the banana split, with a lot of fruit on it!

T.S. Chandler (Bud Abbott): Don’t tell me, let me guess, he took the shirt off your back.
Benny Miller (Lou Costello): Took my pants too.