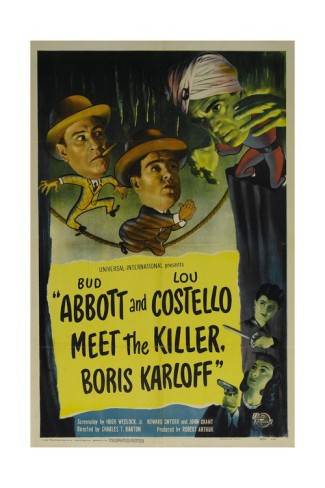 Actually, despite the title of  Abbott and  Costello  Meet the Killer, Boris Karloff, Boris Karloff  isn’t  the killer — but, he is quite funny in this movie.   In a nutshell, Lou Costello  plays a bellhop who is falsely accused of murder; His pal  Bud Abbott  tries to help, but only succeeds in getting Lou into more trouble.

Boris Karloff plays the role of a hypnotist, who tries to hypnotize Lou into confessing — but Lou is too stupid to be hypnotized.   As more bodies pile up, there’s plenty of opportunities for Lou to do his patented frightened reactions.   A good movie, which I enjoyed, and hope you will too.

Seven clients of the murdered Strickland. They decide that they must conceal their (criminal?) pasts and that Freddie must take the blame for the murders

Trivia for  Abbott and Costello Meet the Killer, Boris Karloff  (1949)

[the Swami tries to get a hypnotized Freddie to kill himself]
Swami Talpur (Boris Karloff): Perhaps you should choose the manner of your death. How would you like to die?
Freddie Phillips (Lou Costello): Old age.

Swami Talpur (Boris Karloff): [to Freddie] You’re going to commit suicide if it’s the last thing you do!

Casey Edwards (Bud Abbott): [seeing one of Freddie’s booby traps] That is the most ridiculous thing I have ever seen.
Freddie Phillips (Lou Costello): Oh yeah? Well let me tell you something, if the murderer comes in here alone, somebody else is gonna carry him out.

Freddie Phillips: [upon escaping a  steam box] I saw a hand turn around the corner, and he put on a lot of steam, all the steam he could put on, f-full force… I think somebody’s trying to kill me.

Freddie Phillips (Lou Costello): Who’s the culprit?
Casey Edwards (Bud Abbott): The culprit and the murderer are the same!

Abernathy: Things have been awfully dead around here.
Freddie Phillips (Lou Costello): Much deader than you think.

Insp. Wellman: I’m going to locate Milford and Relia if I have to take this hotel apart with my own hands.

Insp. Wellman: Someone in this room knows a lot more than he or she is admitting, and I intend to find out who it is.