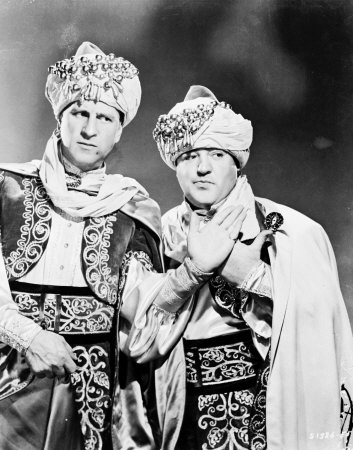 Bud, Lou and derelict in a cell:

Derelict: I haven’t always been a derelict … (looks at Lou) … like you.

Lou Costello: Don’t call me those kind of bad names!

Derelict: Very well, then I’ll tell it to you

Derelict: [to Bud] Thank you … many years ago my father gave me the benefit of a very good education [sad music playing] … then .. I met her. She was beautiful … glorious. We were married.  Two years later – a baby boy. I haven’t seen that boy till this very day.

Lou Costello: Did you say a little baby boy?

Lou Costello: Did he have brown eyes?

Derelict: Yes he did!

Lou Costello: And two little teeth in the front?

Lou Costello: Well, I thought I found my father!

Derelict: Thank you. We were very happy, my little family. One morning we were seated around the breakfast table and a knock came at the door. There stood a man. He was broken in health and spirit. I bade him enter, I welcomed him into my home. I said ‘make my home your home’…and he did! One day I returned from work to find that home was no longer a home. My wife … the baby… and the stranger had fled. Then one day … at the banks of the Poko Moko I found them. Suddenly my brain snapped. All the years of pent up emotion of years suffering welled up within me. I knew I would never be satisfied until I had my bony fingers wrapped around his throat. So with murder in my heart …slooooooowly I turned [acting this out as he speaks, focusing on Lou[, step by step, step by step I crept upon him [creeping towards Lou] and when I saw the stare in his face … I struck and I grabbed him [Grabs Lou and starts pushing him against the wall and shouting at him]

Bud Abbott: What’s the matter? Why are you interrupting the man for?

Derelict: My poor friend, I’m sorry. But every time I hear the word Poko Moko, I just want to kill!

Derelict: Poko Moko!!!! OOhh, I knew I’d never be satisfied until I had his blood running between my fingers…so slowly I turned [does action] step by step, step by step I crept upon him – and when I saw the streak on his countenance I grabbed him and I couldn’t help myself [throws Lou against the wall and begins beating him up] and I was going out my mind [calms down, breathless]

Bud Abbott: Stand still! What’s the matter with you? The man’s telling you his life’s history. It’s interesting.

Derelict: My poor friend! I did it again, didn’t I?

Derelict: What’s happening to me?

Lou Costello: It’s not happening to you brother, it’s all happening over here!

Derelict: [reacts for a second]

Derelict: Poko Moko! BBBRRRRRR…So slowly I turned! Step by step, step by step [Lou calls out for Bud in a quiet voice] … and when I crept upon him … I grabbed him and [again beats Lou and repeatedly slams him into the wall, then throws him across the cell to the other wall knocking his hat off]

Bud Abbott: [angrily to derelict] Just a minute … just a minute! Now you’ve been getting away with murder. Enough is enough. You understand that? I’ve stood by and watched all this! And I’ve let you get away with it … but no more! [bends down and picks up Lou’s hat] – These things cost money. Be careful how you handle them!