The Wistful Widow of Wagon Gap 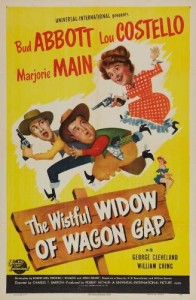 Abbott and Costello’s movie,  The Wistful Widow of Wagon Gap is a spoof on the typical Western, with  Bud Abbott and  Lou Costello playing travelling salesmen who stop in the Old Wild West town of Wagon Gap, Montana on their way to California. Upon entering the town,  Lou shoots a pistol into the air, as the town drunk is murdered. The town then tries Lou for the murder.  Under an actual Montana law of the time, they sentence him to assume the debts and dependents of the dead man. Lou is now worked to death during the day by the Widow Hawkins  (played by Marjorie Main of the ‘Ma and Pa Kettle‘ movie series) and her seven children. And by the saloonkeeper at nights to pay off the dead man’s debts.

Lou then discovers that no one dares to kill him, since they would inherit the Hawkins clan.  He swiftly becomes the Sheriff and starts cleaning up the town.  Using a photo of the Widow and her children, in place of threatening with a gun. He begins pushing Bud Abbott around in a funny reversal of their roles. However, the rumor that the Widow’s land is worth a fortune to a railroad soon has numerous people willing to kill him, in order to marry the Widow and inherit her fortune.

Lou Costello : That wild goose chase of yours is going to lay an egg.

Lou Costello: We stop the stage, the bandits are waiting for the stage, and then you show up instead of the stage.
Bud Abbott: That’s pretty well-staged.

Lou Costello : Marriage is a three ring circus: the engagement ring, the wedding ring and suffering.