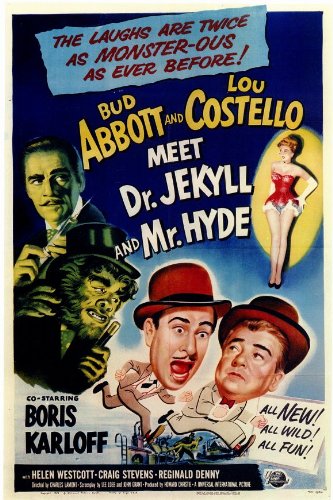 Abbott and Costello Meet Dr. Jekyll and Mr. Hyde  is considered by many Abbott and Costello fans to be one of their worst efforts.   Although it has many very funny moments, it can be safely said that it doesn’t have nearly enough of them.

The basic scenario is that Slim (Bud Abbott) and Tubby (Lou Costello) are American cops in London to study police tactics. They wind up in jail and are bailed out by Dr. Jekyll (Boris Karloff). Jekyll has been murdering fellow doctors who laugh at his experiments. He’s in love with his beautiful young ward, and is willing to murder her boyfriend in order to steal her love.

At one point the serum that turns Jekyll into the murderous Hyde gets injected into Tubby.   Highlights include Lou being turned into a gigantic mouse, a large chase scene at the end with nearly everyone injected with the Hyde formula, and Lou turned into Hyde.

If you’re a fan of Boris Karloff (which I am), you’ll appreciate his performance as both the evil Dr. Jekyll and the more-evil Mr. Hyde.

Is it worth owning?   As part of the DVD collection, absolutely, although I might not purchase it on its’ own.