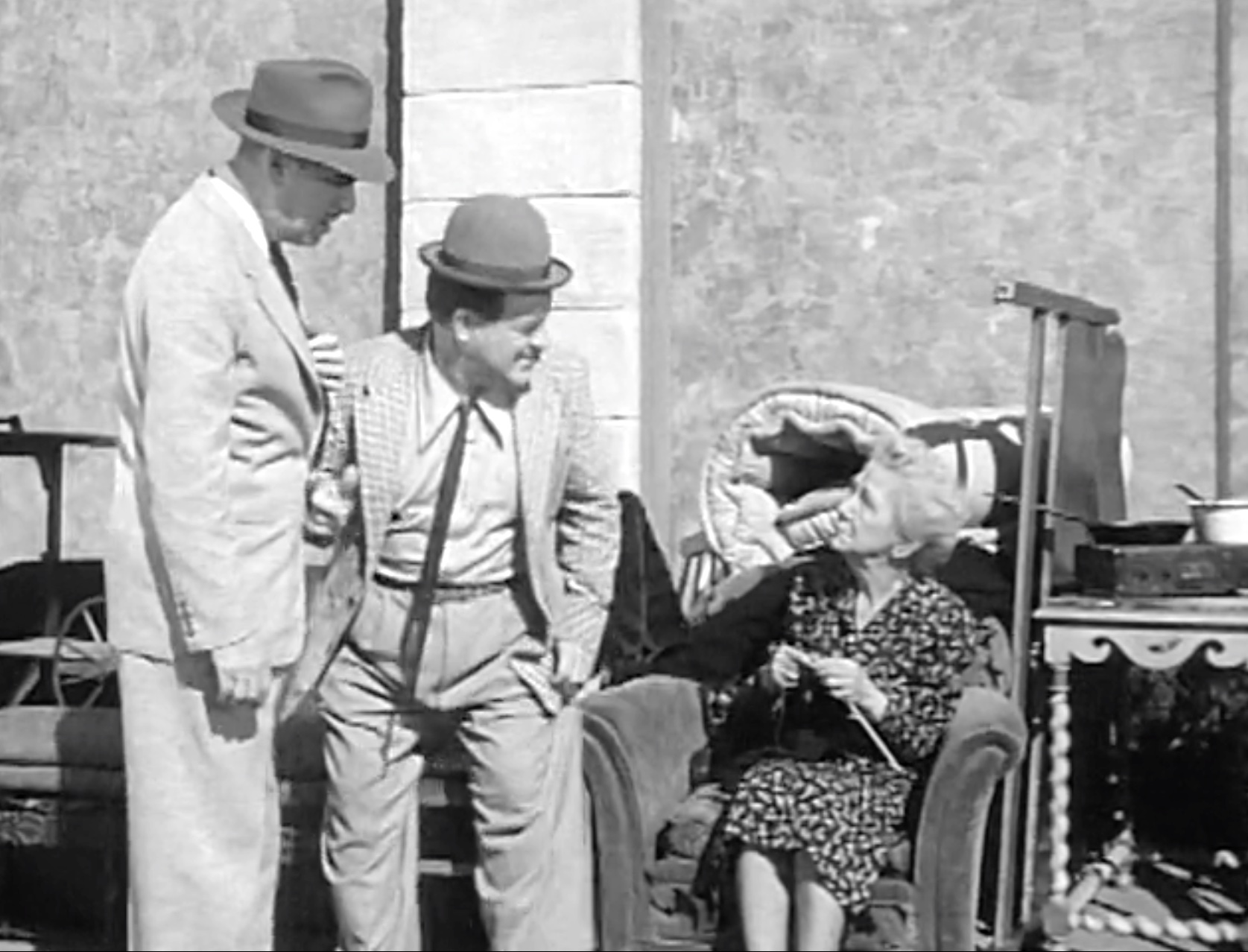 Little Old Lady – The boys attempt to help an old lady who has been dispossessed. They win $300 playing amusement park midway games, but the old lady …

After taunting Mike the Cop by selling him a “chocolate guesser” — actually a chocolate-covered mothball, Lou Costello runs away. His pal Bud Abbott threatens to correct him by slapping him in the face. After a minute of taunting by Lou, he does it! And Lou’s going to hit him back, but every time he raises a fist, Bud slaps him first. “Don’t raise a fist to me, boy.” Then, they see a little old lady on the street, with all of her furniture …

Lou at first misunderstands, but Bud quickly clarifies. The lady’s been dispossessed — evicted for not paying her rent. So, the soft-hearted Lou gives her his last 11 dollars. Which the landlord promptly takes, and puts on her account. Lou vows that he will raise the rest of the money that the little old lady needs — somehow. But the question is: how?

Coming across a panhandler, Lou gets the idea of raising money for the little old lady that way. And the panhandler offers to sell him his tin cup for 5 dollars, since he’s got another one at home. Bud points out that he can buy a new one at the store for 10 cents! After Lou’s nearly cheated, Bud prompts the man to sell it for 25 cents. The man does so, and walks away …. Pulling a new cup out of his pocket!

And Lou’s attempts at panhandling are complete, funny failures. Eventually, he quits in disgust, and goes back to meet Bud at the boardinghouse.

After an introductory joke about Lou Costello writing his mother — to ask for money — the story continues. Bud and Lou are trying to move the little old lady’s furniture off the street. After Lou clownishly tries to carry a chair across the street, only to get turned around, a nice man with a truck stops. The three of them load her furniture …. Into the Salvation Army truck! And it drives off. To add insult to injury, the little old lady’s parrot is still there, and speaks up at the wrong time. First, getting Lou in trouble with Bud, and then with a pretty lady walking down the street!

Next, Bud and Lou are trying to move one of the remaining pieces for furniture — a couch. But Lou, taking a break on the couch, gets pushed down the street by a truck! And then, to make matters worse, it’s parked outside a resale shop, and Sam the owner thinks that Lou’s trying to steal his couch! Soon, Mike the Cop and Bud get involved as well, before the mess is straightened out.

However, there’s good news and bad news. The good news is, Hillary Brooke is letting the little old lady share her apartment. But the bad news is, most of her furniture is gone! What to do? Hillary has the answer for that, two. There’s a carnival, where Mr. Fields is running a game of chance. Couldn’t Bud and Lou win a little bit of money for her?

At the carnival, there’s a lot of comedy, and Bud and Lou see “Hercules” at the Try Your Strength booth (run by Mr. Bacciagalupe). He fails, as does his wife — who blames him for her failure! Bud tries and fails, then its Lou’s turn. Lou manages to hit himself on the head with the mallet and then …. hits it with his bare hand, and rings the bell! Which flies off and hits poor Mike the Cop! And then it’s on to the main event.

Mr. Fields is running a “guess the number” contest, with the aid of ten lovely young ladies. All Lou has to do is pinch one of the girls on the cheek while Sid’s back is turned, and he’ll guess which one. It sounds too good to be true — because it is. After, Sid asks Lou questions like, “Is the number odd or even?”, “Is it between 3 and 4?” etc. But Bud has an idea on how to turn the tables. He has Sid pick the number while Lou’s back is turned. And then, Bud taps Lou on the back, that many times. And it works! At first. Until Sid picks girl #0! After a moment of frustration, Bud kicks Lou in the seat of the pants, causing Lou to shout “Oh!” — and win the bet!

Back at the boardinghouse, Lou gives all of their winnings to the little old lady — $300! And she promptly calls her bookie, and bets it all on a 20-to-1 horse race, ending the episode!

[Asking Mr. Fields to let the little old lady move into the boardinghouse, and put her rent on Bud and Lou’s bill]
Sid Fields: You owe $35 back rent, plus the $7 for the little old lady, that’ll make $42 dollars. And plus $3 for the use of the electric washer.
Bud Abbott: Hey …
Lou Costello: Hey, wait a minute, Mr. Fields, we never use the electric washer.
Sid Fields: Sorry, it was there for you. If you didn’t use it, it was no fault of mine.
Lou Costello: [to Bud] He’s a hard one, ain’t he? [to Mr. Fields] Hey, wait a minute. How much you say we owe?
Sid Fields: 45 dollars.
Lou Costello: Well, take off $40 for kissing my girlfriend, Hillary.
Sid Fields: Why, I’ve never kissed Hillary Brooke!
Lou Costello: Well, that’s no fault of mine if you didn’t kiss Hillary. It was there for you.