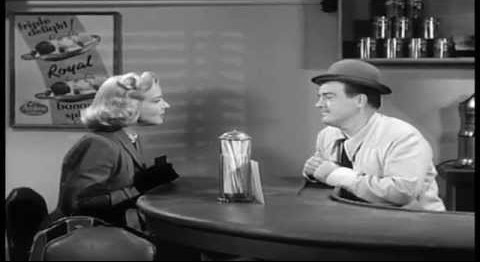 The very first episode of The Abbott and Costello Show is The Drug Store. It begins with the classic Jonah and the Whale routine in front of the audience, very well done. Next comes a flurry of Abbott and Costello routines. Walking into their boarding house, Lou is assaulted by a woman. “How dare you remind me of someone I despise?”  And they try to sneak into their room, only to fail. And Lou gets assaulted by the landlord, leading to the “I’d like to see you do that again!” routine.

Mike the cop appears, looking for a tall thin man and a short, fat man. But Bud’s not short and fat, and Lou’s not tall and thin. “It must be two other guys.” Mr. Fields the landlord gets Lou a job at his brother’s drug store. After insulting Mike the “public servant” they dash out the door — only to be assaulted by the same woman again.

After a short joke about Lou being “drug” by his mother everywhere, Lou gets into a fight with Stinky (Joe Besser). And Lou breaks his lollipop while Bud goes in to get Lou a job. A gypsy woman tells Lou’s fortune, predicting that he’ll inherit 6 million dollars, only to lose it later. Bud, of course, beats him up for losing all of that money! So, into the drug store they go …

At the drug store

The pharmacist (Sid Fields in a wig) hires Bud as Assistant Manager – to keep Bud busily working. Lou needs a coat hook, so he draws one on the wall – and hangs up his coat. A variety of customers come in. First an insomniac followed by three kids who wants “5 cents worth of licorice” — on the top shelf. Following the rule of three, Lou makes the trip up and down the ladder three times for another 5 cents worth, and puts it back. Only to find out the last boy wants 10 cents worth!

Hillary Brooke comes in, and Lou tries to “serve” her.  While she makes up her mind, Stinky and his mother come in, and orders Castor oil mixed with Coke. But Stinky likes it straight. Hillary wants a double chocolate fudge sundae with gobs and gobs of whipped cream. “The more whipped cream, the bigger the kiss”. But Lou kisses a male customer instead, who wants an egg sandwich. But Lou ends up with egg on his face. The man wants ice cream, and leads to him throwing money around and Lou throwing ice cream around. And getting them both fired. After a moment of levity with Mike the cop, Lou escapes.

The episode ends with Bud and Lou saying goodbye to the audience – and fleeing again from Mike the cop.

In all, a very funny and very enjoyable start to the series.

Mike the Cop: I got a report that a short, little, fat guy and a medium-sized sandy-haired guy were annoying women in the neighborhood.
Bud Abbott: Well, I’m no short, fat guy.
Lou Costello: And I’m no tall, skinny fella.
Mike the Cop: Well, must be two other guys.

Lou Costello: You’re gonna make him the head salesman? Why?
Pharmacist Fields: Anybody who can talk me into hiring a hopeless, brainless misfit like you, he must be a great salesman.