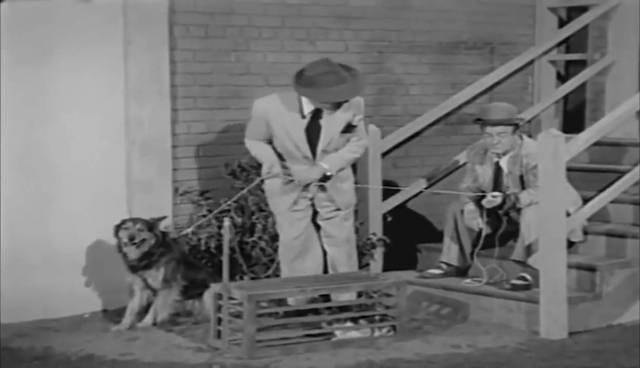 The Dentist’s Office – The Abbott and Costello Show season one – originally aired December 12, 1952

The Abbott and Costello Show episode The Dentist’s Office begins with Abbott and Costello doing the You’re 40, She’s 10 routine for the audience. Then it’s off to the dentist, where the lovely Hillary Brooke is the assistant, and Mr. Bacciagalupe (Joe Kirk) is waiting ahead of them. The screams and noises nearly scare off Lou, until Hillary reassures him. The Dentist (Sid Fields in disguise) drags Lou into the office, and begins unwrapping him.

At the dentist’s office

While Hillary is explaining the doctor’s hunting trophies, the doctor keeps running out for special tools – his satchel, a chisel, and then a blow torch! For Lou? No … to open his satchel. Lou’s both nervous and bombastic, and bounces out of the chair. Eventually the doctor tries to use the drill .. on Lou’s ear! The near-sighted dentist is having some comedic trouble, and after choosing through a series of ever-larger tools, he goes to pull the tooth – and grabs Lou’s finger instead! After another round with the chair, Lou is thrown through the air — and the wall.

Walking back, Bud decides to pull Lou’s tooth himself – with the aid of a dog and a cat.  Mr. Fields catches Lou trying to sneak into his room, but Lou proves to him that a loaf of bread is the mother of an airplane. Out back, a cord is tied to Lou’s tooth, the other end to a dog, that chases a cat — pulling Lou into every obstacle in the back yard, but not pulling the tooth. “That dog ain’t no dentist.”

In front of the audience, it’s time for a short joke, as Lou wishes his cousin the dentist – a D.D. (doctor of dentistry) – was there. But, he had to retire, since his name looked so silly on the sign. His name? Twiddle D.D.

Lou goes to the pharmacy (where he was fired last week) and tries to get some toothache drops. Mr. Fields the pharmacist “defends” Lou by insulting “this poor, unsophisticated mental moron.”  But Lou’s tooth is still bothering him – so Bud decides that Lou needs to go to jail and get free dental care. So Lou goes to pop a child’s balloon.  But Lou gets beaten up by the child instead. Lou goes to steal an overcoat next – but that fails as well.

So Lou insults the first pretty girl who walks by — who turns out to be a criminal on the run, and threatens Lou’s life! Finally, Lou sets off a fire alarm, hoping to go to jail for setting off a false alarm. But despite Mike the cop, it turns out that Lou’s a hero, since the fire department arrived in time to save a burning house – and gets kissed by a grateful woman (Virginia Christine).

So Bud revisits the ‘string around the tooth’ bit — but this time, tying the other end to a car. But there’s a bank hold-up, and it’s the getaway car, and Lou is a hero again, stopping the crooks. As the police officer slaps Lou on the back in gratitude, the tooth finally comes out!

After a slapstick “goodnight, folks” the episode ends happily for all.