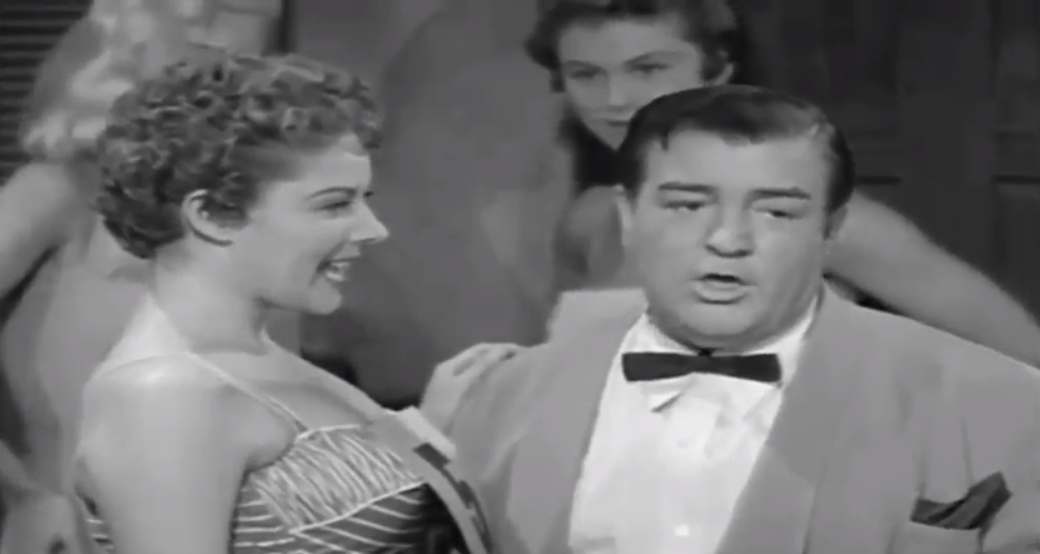 In lieu of rent, Bud Abbott and Lou Costello agree to judge a beauty contest.  A contest that quickly becomes rigged …

Beauty Contest begins with the perpetually-broken Bud Abbott and Lou Costello needing their rent money.  By 5:00 p.m. or Mr. Fields will throw them out! So Bud takes Lou to a “The Friendly Finance Company” to take out a loan.  After a bewildering number of questions from Mr. Blodgett, the gangster-like collector Larry comes in to get a cudgel to help collect an overdue payment from an unfortunate customer.

Lou leaves with his $100 and meets an old “friend” named Joe Kelly.  Joe apparently wants to fleece Lou of his $100 by investing in Joe’s company and gives him a ride home.  In the meantime, Mr. Fields asks Bud to be a judge at the beauty for his national lodge – the Mud Hens.  Lou walks in, having spent this $100 investing in Joe’s company.  Bud sweet-talks Mr. Fields into giving them three more days since he’s written friends asking for money.

Back at the finance company, Larry is talking to his beautiful girlfriend Mabel who is going to enter the beauty contest.  Having read that Abbott and Costello are going to be the judges, he sends them a $100 bribe.  Back at the apartment, Lou has literally used his stock certificates as wallpaper.  The mail comes in, with no money (but plenty of insults) from their friends.  Bud goes to tell Mr. Fields that they don’t have the money and will have to move out.  But Mr. Fields has an alternative — if his niece Columbine will win the contest, they can stay.

Once the contest starts, the threads come together – and Lou doesn’t know that the fix is in for Contestant #10, or #11.  And #5 has been shamelessly flirting with Lou.  And Bud is accidentally locked out of the building, while Lou picks #5.  Larry and Mr. Fields start the chase, and they escape.  Back at the apartment building, Mr. Fields is putting their apartment for rent — and Larry is interested.

After a night sleeping on a park bench, Abbott and Costello meet Joe, who informs them that Lou’s “worthless” bonds are now worth $1,000 each!  So they decide to break in and get their bonds.  By sawing through a wall.  Where Larry is sleeping on the other side – a very funny scene.  A phone call comes in from Joe — the wrong stock went up! Bud and Lou flee, until the next episode.

Where have I seen you before?

Lou Costello: If I was to ask you a silly question you’d get all muffled up too.  Who is the watchman on the George Washington bridge?
Mr. Blodgett: Day or night shift?

Mr. Fields: [talking about his niece Columbine] I’d like to get her out of my hair.
Bud Abbott: What hair?