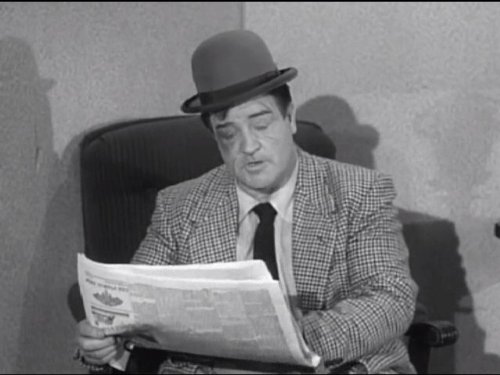 In Wife Wanted, after a quirky poker game with Mr. Fields, the boys get a letter from Lou’s grandfather. He plans to give Lou $10,000 …. If Lou’s married. After several attempts to meet women, Lou reconnects with his former girlfriend, Agnes, who has just broken up with a jealous wrestler.

Wife Wanted begins with Bud Abbott, Lou Costello, and Sid Fields playing a “friendly” game of cards. And Bud plays a “kangaroo straight” — 2, 4,6,8,10 of different suits. He cons Lou into thinking that it beats any other hand — with Sid Fields going along with the joke. On the next hand, Bud decoys Lou out of the room — to swap a card with Lou’s hand, and give Bud a winning hand. He thinks. Then Sid Fields does the same to Bud. And in the end, Lou has a “kangaroo straight”. But there can only be one per game?!?

Then, a letter arrives from Lou’s grandfather. Lou’s been “exaggerating” in his letters to his grandfather. He’s told him that he’s married! So, now the grandfather’s planning on a visit. And he’s planning on giving Lou and his bride $10,000 dollars! Except, of course, that he’s not married. But Bud has a plan. Get Lou married!

A series of comic misadventures

Lou tries to find a young lady, but all of his efforts backfire in slapstick rejection.

Just when it looks like everything’s bleak, Lou walks into the apartment singing and happy. His old girlfriend, Agnes, has moved into the boarding house. And she’s no longer seeing her boyfriend — the jealous professional wrestler! What could go wrong?

Lou Costello: [practicing proposing to Agnes] Will you marry me?
Sid Fields: No! You’re the ugliest thing I’ve ever laid eyes on!

Armed with a “how-to” clipping from the newspaper on how to propose, Lou goes to Agnes’ apartment to propose. She’s there, with a store mannequin that she’s using as a clothes dummy for her sewing. Despite Lou’s nervous proposal – Agnes accepts! And Lou puts an engagement ring on her finger, with an embarrassingly small diamond. So small, Agnes needs a magnifying glass to see it! But she loves it anyway.

But then, the jealous Bone Bender Brodsky comes in! The professional wrestler’s very jealous — and angry!

Then, Bud comes in with “good” news. Lou’s grandfather’s not coming after all, so he doesn’t have to get married! Agnes is understandably upset by the reason that Lou suddenly wanted to marry her! So, she has Bone Breaker through Lou out the window! Ending the episode.

In short, Wife Wanted feels very much like a remake of the Three Stooges short film, “Brideless Groom“. And in a sense, it is. Both are written by Clyde Bruckman. The similarities are very obvious.