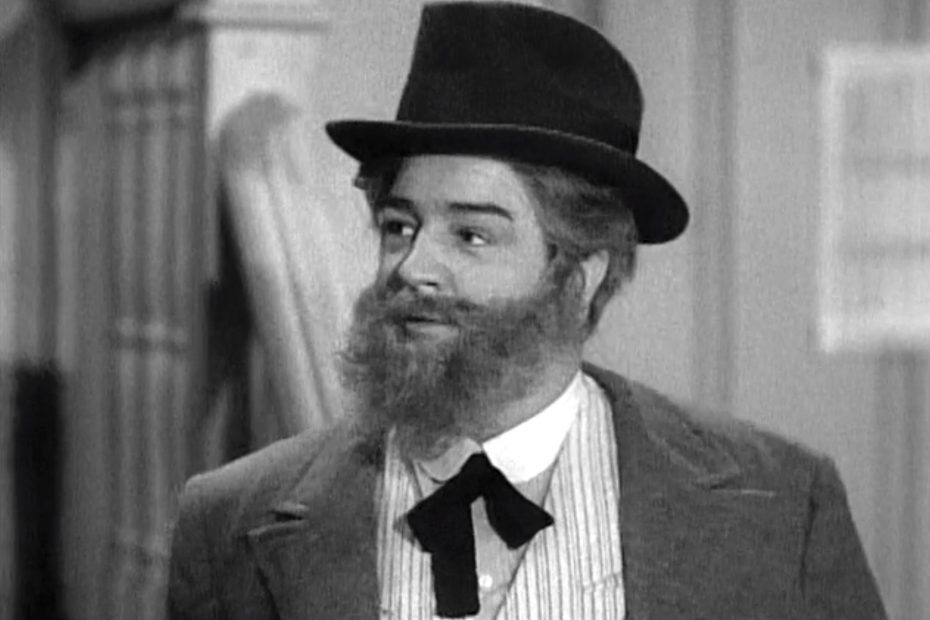 Uncle from New Jersey – After Mr. Fields locks the boys out of their apartment, Bud hatches a plan to convince the landlord that Lou is the sole heir to the fortunes of his rich Uncle Rupert. To pull off the scheme, Bud disguises Lou as his uncle. But Mike the Cop starts to fear that the boys have murdered Rupert!

Getting locked out of the apartment

After Lou Costello tries to steal his cream, landlord Sid Fields has had enough! Since Lou and Bud Abbott are far behind on their rent, he decoys Lou out of the apartment when Bud’s out — and puts a lock on the door!

In the meanwhile, Bud Abbott is visiting a friend — who calls Sid Fields, pretending to be a lawyer. And he’s supposedly looking for Lou Costello on behalf of Lou’s wealthy Uncle Rupert. Who plans to leave $7 million dollars to Lou! Causing Sid Fields to do an about face, He then welcomes Lou back into the apartment, pretending that he was only joking. He even offers them $300 dollars! But then, Mike the Cop thinks that Sid Fields has fallen for one of Bud’s cons …

Mr. Fields is angry, threatening to call the cops! But then the finance company calls Bud Abbott, about his car loan. However, Bud pretends its Western Union — and with Sid Fields listening, writes down the “message” that Uncle Rupert will be visiting them tonight! Once Sid leaves:

Lou Costello: If my Uncle Rupert walks through that front door, I’m divin’ out that window.
Bud Abbott: Why?
Lou Costello: He’s been dead for fifteen years!

Bud and Lou come into the apartment, having done a little shopping. Now with a new beard and wig, the nervous Lou is going to impersonate Uncle Rupert. He goes out the ground floor window, so he can go in the front door. Once there, “Uncle Rupert” greets Sid Fields and Mike the Cop, and they escort him to Lou’s apartment. Bud opens the door, explains that Lou’s shaving, and welcomes him in. Sid and Mike are both fooled …

Next, inside the apartment, Bud and Lou are packing their trunk, planning to run away before their trick’s exposed. While packing, Lou sees that a rat has chewed his suit, so he asks the landlord for rat poison. After a short prank on Mike the Cop, he’s suspicious that Abbott and Costello are planning to murder Lou’s uncle! With rat poison. Next, Sid Fields comes into the boys’ apartment with the rat poison, and sees their large, empty trunk. Why, it’s just the right size for Uncle Rupert’s body! So now he’s suspicious as well.

Bud wants to go out and get a bite to eat. But Lou’s hungry as well. To divert suspicion, Lou disguises himself as “Uncle Rupert” again, to go out the window and come in the front door. Once he’s in the apartment, Lou can take off his disguise, and they can go out to eat. But Mike and Sid are listening outside the door:

Sealing the suspicions of Sid Fields and Mike the Cop. Soon, Mike barges in, demanding to see Uncle Rupert. The boys have locked the trunk, and Mike needs a warrant to open it. So, he has Sid Fields call his lieutenant for one. In the meanwhile, Bud and Lou are going out the window, taking the trunk and disguise with them. Mike apprehends Bud, while Lou sneaks back in the window. When they go into the apartment, sitting in a chair is — the supposedly murdered Uncle Rupert! Mike tells him about the “murder plot” — and “Uncle Rupert” disinherits Lou and is leaving!

Unfortunately for Lou, when “Uncle Rupert” left the apartment, his beard came off! So when “Uncle Rupert” says goodbye to Sid Fields, the whole thing is exposed. The episode ends with both Sid and Mike the Cop beating on Lou Costello, who’s yelling out “Hey, Abbott!”