Home > Abbott and Costello Show > Getting a job 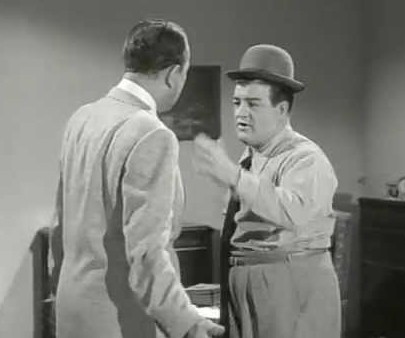 In the Getting a Job episode of the Abbott and Costello Show, the comedy starts quickly. Bud Abbott has gotten a job at a bakery, making loaves of bread, leading to their classic “Loafing” routine. Afterwards, Bud decides to get Lou Costello a job … After looking in on their pet chimp Bingo, who throws wet rags at Lou.

Soon, Lou is trying to deliver hats to the Susquehanna Hat Company on Floogle Street. This is another classic routine, where strangers on the street destroy them one at a time. As do Bud and Stinky (Joe Besser) as well!. This version has a funny ending. Each person punches a hole in the straw hat, but Lou hands the final hat to Stinky … A metal Army helmet that Stinky tries to punch through!

Since Lou now owes money for all those hats, his pal Bud is determined to find him another job … And so he stops the first well-dressed man that he sees, to see if he can get a job at wherever the man works. After listening to Lou’s impassioned plea, the first man informs him that he’s off to purchase a new battery for his hearing aid! The second man he asks complains about the job he has, and Lou agrees with him. And so the man’s wife appears, and starts to beat up Lou for encouraging her husband to quit his job!

So, it’s off to the Field’s Employment Agency, where Sid Fields (in a wig) is hiring for a one-night event for fifty dollars. But it costs the man fifty-three dollars in deductions! Soon, Bud and Lou walk in, having decided to act as though they don’t need a job, and start insulting the man non-stop. After some very funny slapstick with the various items in the audience, Mr. Fields gives Lou a verbal dressing down, and throws them both out. Then he calls for a janitorial service to come and clean up the mess. Bud and Lou walk in, kindly and oozing of politeness. Mr. Fields: “What can I do for you boys?” Lou: “You can drop dead! We got a job across the hall!” and after a moment of slapstick with their hats, they exit!

And, with a closing joke, the episode is over. Getting a Job is a very funny episode of The Abbott and Costello Show, and is highly recommended.