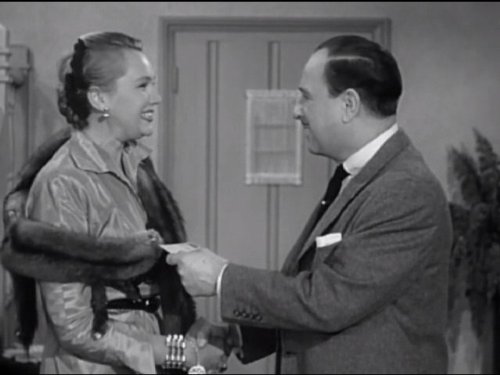 In Amnesia, Lou Costello plans to marry Edna, his lonely-hearts penpal. But his pal Bud Abbott wants to break up the romance. He convinces Lou that he has amnesia and has a friend pose as Edna to make his life miserable.

In Amnesia, Bud Abbott is trying to keep his pal Lou Costello from making a serious mistake. Lou’s been corresponding with the unseen Edna, a Lonely Hearts pal. He wants to send her $35 for bus fare to come to him …. So they can get married!

Bud wants to prevent this, for the obvious reason that he and Lou can barely pay their monthly rent. So, Bud confiscates Lou’s $35! So, how can Lou raise the money? He happens to see Friendly Fields’ Used Car Lot! So, he goes to sell his car. It’s a funny scene, He first wants to sell the car to Lou, wrongly thinking its part of his inventory — for $350 dollars. Once he realizes that Lou wants to sell it, the offer goes down to $35! And Friendly Fields demonstrates how little the car’s worth, by damaging it! Broken windshield, pulling off the bumper, puncturing the tire …. And then makes multiple “deductions” for the repairs that he’ll have to make to the car, leaving poor Lou with a nickel.

On his way home, there’s a gambling raid just down the street from Lou’s boarding house. He sees a slot machine, and puts his last nickel in it. And he wins! But, one of the cops thinks he’s one of the gamblers, and knocks him out cold with a billy club! Thankfully, Mike the Cop is there to intervene. He vouchers for “my pal Lou Costello” and takes him home, where Bud calls a doctor to examine him. The good news is, Lou will be alright after a few hours of sleep. But Bud’s run into an old actress pal, Maxine, who’s waiting for her husband to send for her so they can perform in Europe. And Bud has an idea …

Bud imposes on Maxine, to pretend to be Edna! They pretend that it’s three months into the future, and that Lou’s suffering from amnesia. Since Edna supposedly threw him down the stairs last night! Bud’s idea is to show Lou how much of a shrew the unknown Edna could be. And Maxine plays the role with glee! Soon, Lou’s afraid that Edna’s going to kill him! So, he wants a divorce. Bud asks Mr. Fields, who’s in on the gag, to act as Bud’s lawyer. But in one of Sid Fields’ trademark “reversal” routines, he’s sympathetic to Edna, and ends with Lou being accused of battery, drunkenness, neglect, abuse, etc. By his own lawyer! With a weekly alimony of $95 weekly, on a hypothetical income of $100!

All’s going swimmingly for Bud’s scheme, until Maxine’s husband unexpectedly arrives from Europe! The good news is, he wants to take Maxine back with him. The bad news is, Lou wants to know what this strange man is doing, hugging “his” wife! Leading to George beating up Lou! Ending with Lou being unconscious again. He finally wakes up in the apartment, where Bud convinces him that The whole thing’s been a dream. Leaving Lou with just one question: where’s his 35 dollars?