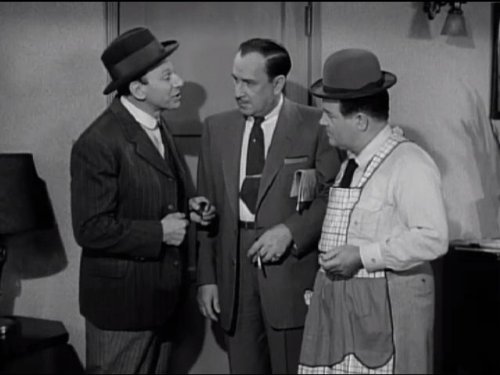 $1000 TV Prize – While trying to repair Mr. Fields’ television set, Lou answers a phone call from the “Money to Burn” quiz show and provides the correct response to the $1000 question. The prize money will be delivered that night, so Bud and Lou scramble to keep Mr. Fields and Mike the Cop out of the way.

Bud Abbott decides that the and Lou Costello can fix Mr. Fields’ TV set for him …. And pocket the ten dollars he gave them to pay the TV repairman! It’s very funny as they try to get into Mr. Fields’ apartment, with Mike the Cop’s suspicions interfering. Lou decides to climb in through the window, and then Mike the Cop hears the noise. Mike thinks someone’s broken into the apartment through the open window, and tries to go after them. But he gets stuck! Adding insult to injury, Bud comes by, thinks it’s Lou in the window, and accidentally steals his pants while trying to help “his buddy”! No sooner does the pantless Mike come out the front door, then his supervisor’s in the hallway! It’s reminiscent of the running joke in Buck Privates Come Home

Lou Costello: [Mike the Cop has just insulted the boys as usual] I’d like to punch that dumb cop right in the nose again.
Bud Abbott: Again?
Lou Costello: I felt like it yesterday, too.

Finally, Bud and Lou make it into the apartment, and the inept Lou nearly blows up the TV set. Bud takes over, and the set comes on to a quiz program. The phone rings, and Lou wants to answer it …. Bud’s convinced that the “Money to Burn” quiz program is bogus. But Lou accidentally answers the program correctly, winning $1,000 dollars! And then the set’s broken again, just in time for the TV repairman to arrive, and take the TV set down to his shop. Then the quiz program calls back, and tells Bud that they’ll deliver the money that night at 8:00. And Bud’s scheming to get the money, since “they” answered the quiz question.

There’s a running joke of Lou having swallowed Sid Fields’ key …. So now he’s trying to fish it out with. a small magnet. Which, with Bud’s help, he also swallows! And Sid Fields gets a call from the TV repair shop, who wants $160 for the repair (a large sum in the day). Bud’s bought Sid a ticket to the fight, so he’s out of the way when the $1,000 dollars arrives. And Mike the Cop’s borrowed another TV, and put it in Mr. Field’s apartment. Where he’s going to watch the fights! So when Bud and Lou come in, they see Mike there! And soon, the chase is on. Bud Mike’s missing his shoes again, and runs into his superior again! And there’s a running gag of Lou stepping on Mike’s bare feet.

In the kitchen, Bud Abbott’s brewing some coffee. With a Mickey Finn in Mike’s coffee, to put him to sleep, for when the money arrives! And Bud and Lou do the “swapping coffee cups” routine, each thinking the other’s cup has the drug in it. Soon, Bud’s asleep, as is Mike! Lou answers the door, thinking it’s the quiz show. But it’s actually the TV repair man, who beats up Lou, thinking he’s Sid Fields! Then Sid Fields returns, and the man from the Quiz Show arrives. Who Sid thinks is the repair man! They fight, and the man leaves with the $1,000 check! Finally, Lou drinks the drugged coffee, and they’re all unconscious, ending the episode.