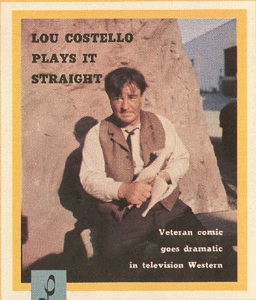 Lou Costello, the short, rotund , butt-end of one of the entertainment worldâs longest running (22 years) comedy teams,  Is working as a single these days and gratifying the hidden desire of every baggy-pants comic— he is playing it straight.

On October 22 Costello appeared in a Wagon Train episode as a pathetic little derelict who stands accused of murder. He cautiously backed into his new found career on G.E. Theater by playing a helpless little plumber who unwittingly becomes embroiled with a pack of thieves. “It’s the kind of role,” Costello says, pride creeping into his New Jersey tinged voice, “that Harry Langdon used to play.”

Stretched put on a cot in his dressing room at the Dunes Hotel in Las Vegas on a recent desert hot evening “drying out” from his dinner show performance as star of a bit of old fashioned vaudeville known as “Minsky’s Follies of 1958,” Costello reviewed his past career and future hopes with engaging candor.

“Bud Abbott and me,” he said, “worked together since, I think, late in 1934. Bud was a dandy, a real sharp dresser. Easy going kind of guy. Me, I’m a worrier. I worried about Bud for 22 years. Would he be there for rehearsal? Would we make it to the airport on time? Did he know the new material?

“We split up first back in 1945. I fired a maid, he hired her, we had words, and that was that. We had been booked into the Roxy for a couple of weeks and the Roxy said OK, they’d take me alone— for $35,000. When Bud’s lawyer heard about that, well, Bud showed up at the Roxy. We only spoke when we were on.

Since then, Costello has had to worry only about himself– and his wife, three daughters, three grandchildren, his mother, and a brother and a sister. âIâm a family man,â he said, âI like it that way.â

Costello considers dramatic work as being easy, at least compared to what he had been doing for 22 years with Abbott. “It’s easy on me,” he explained. “No falls, no pushing around, no seltzer in the face. But I had a real rough time with the guy inside me at first. This guy inside, he kept saying, “What a perfect spot for a tumble, kiddo. Go ahead.” And then, “Eight to one you forget the next line.”

“I blew a beaut on Wagon Train. Ward Bond had this long speech, which kept givin’ him trouble, and then he’d turn to me and say âTobias?â And all I had to do was look at him and say, “I didn’t do it.”

“Well, we had to go through it I don’t know how many times because Ward kept blowing it, but I was letter perfect. Finally he got it right and I said my line and all of a sudden the whole set broke up. Everybody was holding their sides laughing.

“I hadn’t realized it, but when Ward said “Tobias?” on that last take, I looked at him like I’d done a hundred times before, only this time I said “I did it.”

Howard Christie, producer of Wagon Train, deliberately designed the episode with Costello in mind and feels the gamble paid off handsomely. “I’d produced 14 of those Abbott and Costello pictures out at Universal,” he said recently, “and I always felt a guy like Lou had to have a lot of heart to be the kind of comic he is. I am very, very pleased with the result. He was frightened half to death by it the first day of shooting, but then he just seemed to grow into it. It’s a real tear jerker.”

Costello himself has no intention of :playing it straight just to play it straight.” He feels a part has to be right for him or there’s no point in trying to do it.

“I’m a wistful little guy, you know what I mean? I’m the underdog, the guy nobody pays much attention to until something happens to him. I’d be way out of place trying to play some guy like a big hero or something like that. I’ve been doing comedy for maybe 30 years now. People know what I look like and what kind of little guy I am. They wouldn’t accept too much different from that, would they?”