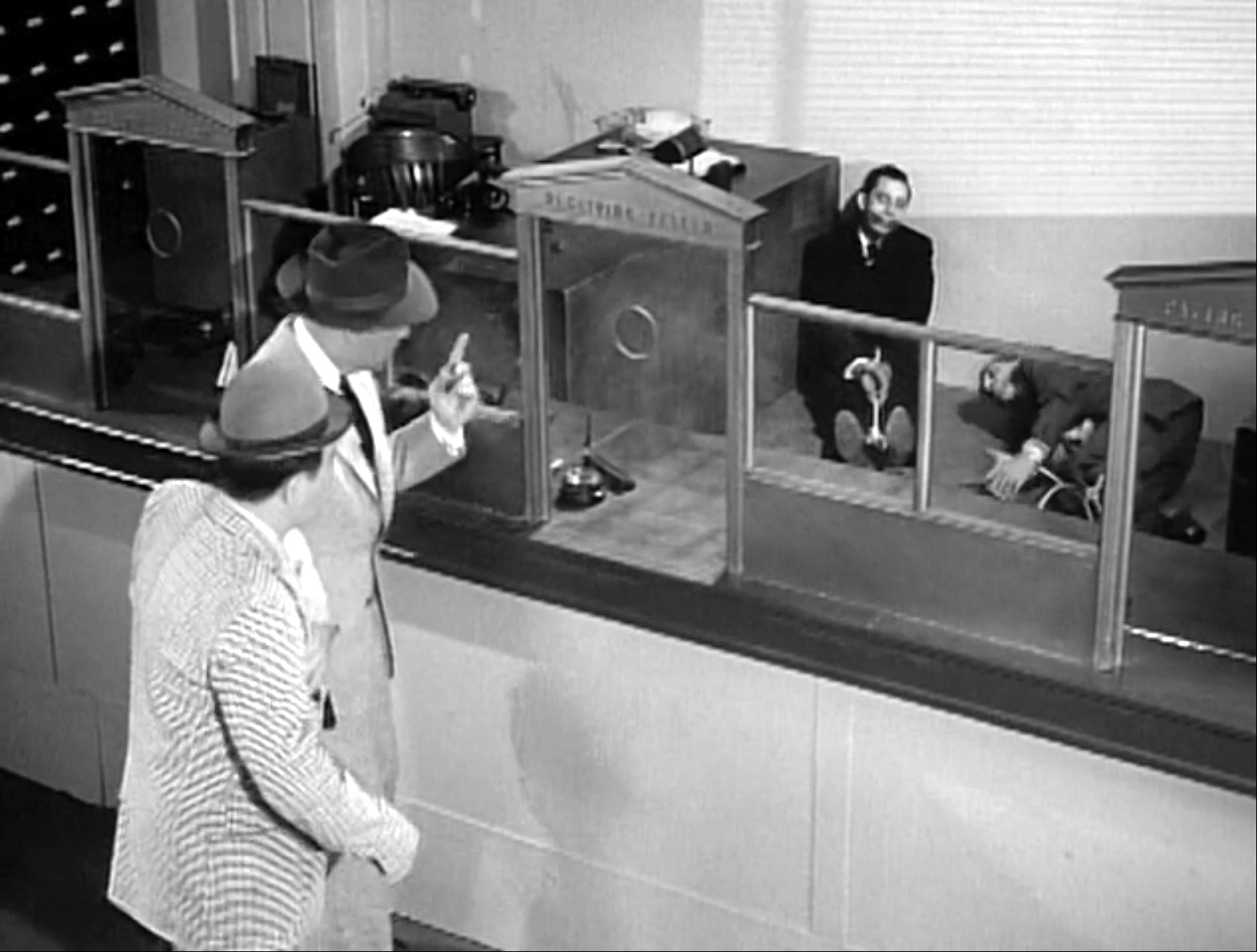 Alaska – Lou receives word that his uncle has struck gold in Alaska, and the boys plan to join him. But they are delayed by a bank robbery, and then literally get stuck when Lou accidentally adds quick-drying cement to Bud’s foot bath. (Bud sports a mustache for the first time in this episode.)

After some word play with a telegram girl in the opening, Bud and Lou learn that Lou’s uncle has struck gold in Alaska! So, it’s off to the bank to get a loan so the boys can cash in on the claim. After some verbal play, they show up at the bank. where the doors are unlocked. The bank has been robbed! Hillary Brooke comes in, and wants to make a deposit. Bud “helpfully” puts the cash in his pocket, until Lou makes him put it in the drawer. Then, the duo accidentally step on the bank alarm!

In a very clownish moment, Bud and Lou walk out of the hospital as the police arrive …. By pretending that Bud is pushing the “wounded” Lou on a gurney! They run into Mike the Cop …. And after telling him about the gold mine, he wants a piece of the action! For the “bargain” price of only two hundred dollars! But, he’s standing on the sheet of their clown “gurney”, and it’s exposed as a fraud when Bud and Lou walk away! Mike the Cop’s justifiably upset, of course, and thinks he’s been swindled.

They run home, when Bud puts on a fake mustache to disguise himself from Mike. But it does no good, and Mike the Cop recognizes them both, and is about to arrest them! But, they’re rescued by a stranger, who claims to be the commissioner of police, who tells Mike that he’ll vouch for them. And, after Mike leaves, he offers to buy them a drink in a saloon.

The saloon scene is very funny! The commissioner is clearly insane, as he sees the empty bar as being filled with people, etc. And when they put their drinks together in a toast …. They can hear the glasses clink! Then, Lou “breaks” an imaginary bowl …. And Joe, the imaginary bartender is angry! He crawls over the imaginary bar and pulls out an imaginary knife! So, the commissioner shoots him with an imaginary gun! And in an imaginary courtroom, he’s convicted of murder, and hung on the gallows …. Then Bud gets into the act as well! And then, Lou! As he’s taken to the “gallows”, like the two before him, he begs for water …. And gets soaked!

Back at the rooming house, they trip and make a mess. Mr. Fields’ temper flares, and he’s about to throw Lou out …. Until Lou shows him the telegram, totally changing Mr. Fields’ attitude! This leads directly to the gold ore routine. Where, Lou hears “gold ore” and thinks “gold or …”. Despite this, he agrees to finance Bud and Lou’s trip.

Back at their apartment, Lou tries to help Bud by soaking his feet in warm water with Epsom salts. But, he grabs the box of quick drying cement instead! While it dries, they continue the “gold ore” bit, with Bud trying to explain about digging deep into the ground, finding a gold vein, and hitting the mother lode. But Lou’s offended:

I never again want to hear anything from you like that, Bud Abbott! You are besmirching the good name of Lou Costello, when you say to me that I got to go down in the mines, and strike my mother – in the vein, while she’s carrying a load; Bud Abbott!   That is going too far!

Let’s get Bud Abbott out of the cement!

By this time, the cement’s dried, and it’s a hilariously clownish affair! First, Lou tells Bud he plans to take advantage of Bud’s helpless condition! Lou makes a fist and … Gets slapped by Bud! Then, Lou shouts “Fire!” to get help, and Mr. Fields comes in with a bucket of water — and soaks Bud! He studied engineering for 4 years, you know. He’s going to use a hammer and chisel. Does Lou happen to have a chisel? Right here in my pocket! How about a hammer? Like a small hammer, used to put nails in the wall? Lou brings back a sledgehammer! And Mr. Fields’ backswing knocks Lou on the head, and into the floor!

It’s very fast paced clowning around, as Mr. Fields tries to use an ironing board as a lever to get Lou out of the hole, the head of the sledgehammer flies out the window and hits Mike the Cop, and then Mike comes in. We’ll use gunpowder from my gun to blow Bud out! What could go wrong?

[at the bank, which has been robbed]
Bud Abbott: Can’t you see he’s got a gag in his mouth?
Lou Costello: Well, if he has, he never had a chance to tell us.

Bud Abbott: When you go into a saloon, the Devil goes in behind you.
Lou Costello: If he does, he buys his own drink.