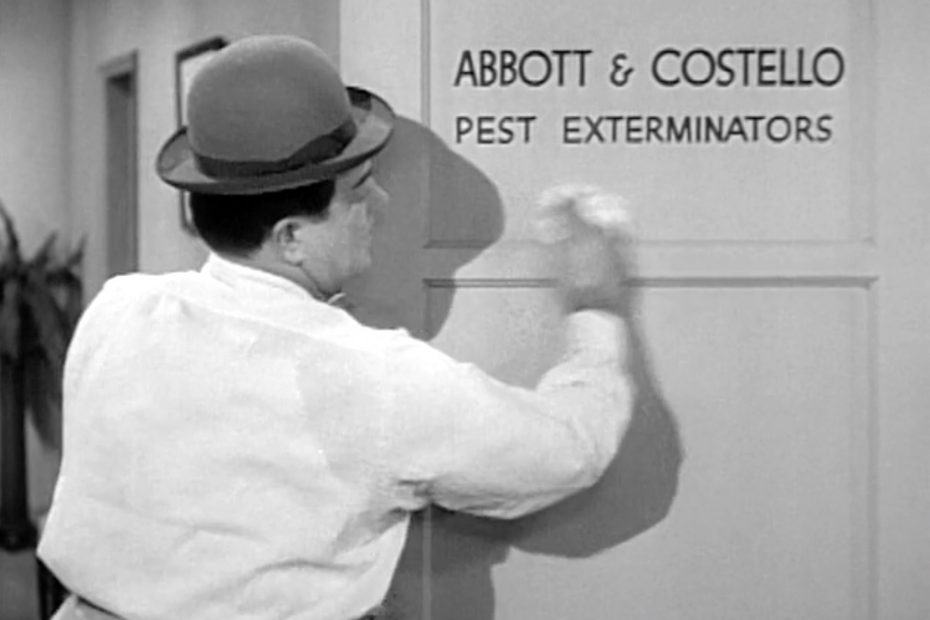 Pest Exterminators – The boys have a new pest extermination business. While on a job at a psychiatrist’s office, they answer a phone call from a Mrs. Featherton, who asks them to come to her house to “take care of her aunts.”

Pest Exterminators begins with Bud and Lou starting a new business. They’ve become pest exterminators, and are running their business out of their boarding house. Without telling their landlord, Sid Fields, of course. Lou Costello is putting their company name on their door. On the inside, in a clown moment. That way, Mr. Fields can’t see it and get angry. Of course, no one else can see it either. So, Bud Abbott tells Lou to put it on the outside. Next, in a clown moment, Lou takes the door off the hinge and turns it around! So, when Sid Fields sees it, and gets angry, he jerks the door open — and it falls on top of him! And then Lou tries to help him up — while standing on top of the door!

Then, Bud and Lou are hired for their first job! They gather their equipment, to head out to the job. Unfortunately, Lou has their vehicle in the shop. Lou hocked the only money they had, a 20 dollar bill, for $15. Bud, never above a quick con, sells the $20 pawn ticket to Mike the Cop’s boss, the Sergeant for $15. Making $10 profit.

At the psychiatrist’s office

Their first job is exterminating termites in the office of a psychiatrist. On the way there, Lou gets into trouble with a gumboil machine, annoying Mike the Cop in the process. At the office building, the janitor initially doesn’t want to let them in …. Until a hand goes through a termite-ridden wooden panel! While working, different patients come in. First, a schizophrenic alcoholic patient mistakes Lou for the doctor. He gives his “symptoms” to Lou — including seeing elephants! Then, a woman comes in and makes the same mistake. She comically explaining what sounds like weird pregnancy cravings. Until poor Lou passes out from the though of some of the nauseating cravings.

While in the physiatrist’s office, Lou answers a call from wealthy Mrs. Milo Featherton. She is upset of the behavior of her elderly aunts. Which Lou mistakes for “ants”, of course. There’s a bit of a shout-out to The Who’s on First? routine, when the lady gives her address — 623 What Street.

When they arrive, the confusion continues as Mrs. Featherston describes the “ants” habits – what they eat, where they live, how they bathe themselves, etc. So Bud and Lou finally go in, and meet the “aunts”. They’re playing Cowboys and Indians, which is why Mrs. Fetherston called the psychiatrist in the first place. But it turns out, they’re not crazy — they’re lonesome. So Bud and Lou offer to take them out, once they’re done. So while the aunts get dressed up, Bud and Lou fumigate the room.

This leads to one final misunderstanding, as Bud and Lou come out and tell Mrs. Featherston that they’ve killed the ants. And she thinks that her eccentric aunts have been murdered! But while the butler runs out to get the police, the aunts come out — alive and well — ready to go out with Bud and Lou. After a final bit of chaos with the police sergeant, the episode ends.