In Society [Abbott and Costello Show] 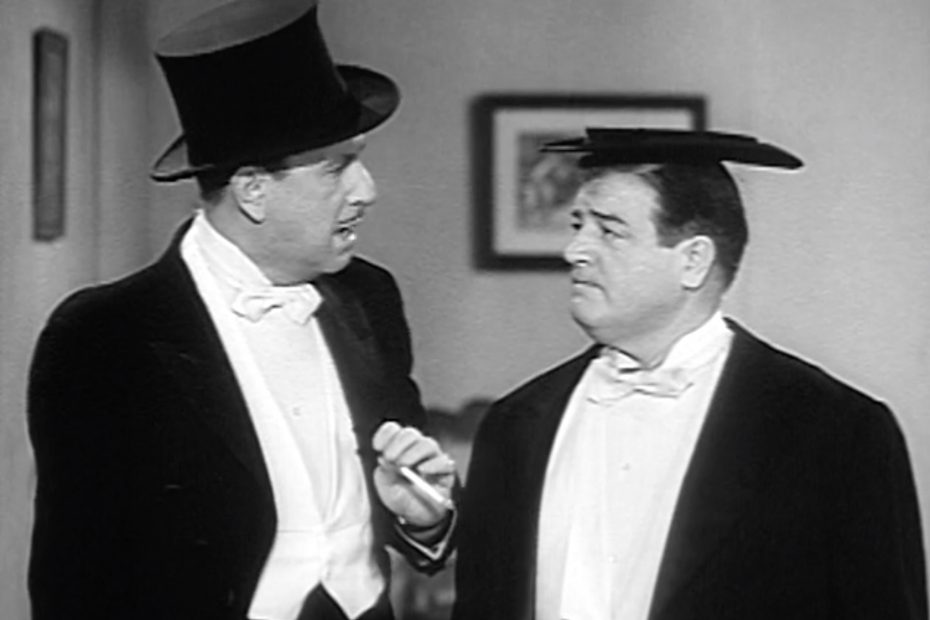 In In Society, Bud and Lou are hired to pose as British noblemen at a swanky party.

Act I – In Society

In Society begins with Lou Costello trying to take a nap in the apartment. Bugged by a fly on his nose, he first slaps himself silly. Then, he destructively tries to kill it with a flyswatter, damaging the items in the apartment. So, Mr. Fields comes in to see the damage to the apartment. And if Lou doesn’t pay the rent in ten seconds, he’ll call Mike the Cop! Lou’s convinced that his Pal Mike won’t arrest him …

So, Mike’s dragging Lou outside the apartment house, to take him to jail! But when Lou resists, Mike threatens to handcuff him. And Lou gets him to demonstrate how handcuffs work …. Ending with Mike’s hands cuffed behind his back! Once he’s sure that Mike can’t get out, and refusing to unlock him, Lou begins slapping Mike the Cop around! But while Lou goes inside to bring Bud out, Hillary Brooke comes by, and unlocks Mike! Unknown to Abbott and Costello, Mike’s free, but keeping his hands behind his back. So when Bud and Lou come out, and tries to get Bud to abuse Mike as well! And then the obvious payback happens — offscreen!

Back in the apartment, Bud explains to Lou that they’ve been hired as escorts for Mrs. Van Goo’s party. After dealing with Lou’s confusion over “evening clothes” not being his nightgown, the boys dress up and are ready. They meet with Mrs. Van Goo. It turns out Bud is a dead ringer for European royalty, the Duke of Gluten, and she wants him to appear as the Duke at her party. For $1,000 dollars!

Arriving at the party, Lou is mistaken for the butler, and other party arrivals give him their coat and wraps. After a moment’s confusion with the butler, they join the party. At first, Bud Abbott’s impersonation of the Duke of Gluten is going very well. He keeps the attendees spellbound for an hour with the stories of “his” travels and adventures. But then, Lou decides to get into the act. He tells a riveting story about the little Western town of Yippee, and the townspeople betting on which carcass the buzzards will eat first. But he doesn’t know the punchline! He had to leave town before the buzzards arrived. So Bud slaps him!

Then it’s time for the actual dinner party. Lou’s lack of high society manners show, as he keeps looking for the bowl of soup that the butler’s removed. Then, Lou accidentally eats a lady’s powder puff instead of a biscuit — I gag that I personally associate with the Three Stooges. Then, they’re served artichokes. And neither Bud nor Lou know what they are. Lou thinks you have to “peel” them to get down to the prize inside! So, they start peeling with abandon, and the leaves fly, hitting the other attendees! Then, it’s time for dessert. And soon he’s chasing the cherry across the table. Then under it! Next, Lou startles/trips the butler, and the cake goes flying! Soon, it’s a full-on food fight, ending the episode.

Lou Costello: [people at the party mistook him for the butler and gave him their coats and wraps] Abbott, look what they gave me! I’m going out and hock this stuff.
Bud Abbott: Knock it off! Earls don’t do that kind of thing.
Lou Costello: No, But Lous do.

Bud Abbott: Tell them about the time you killed aa boar.
Lou Costello: I never killed a bore. But I’d like to try it right now.

Lou Costello: [showing off the medals on his costume] You like this one? I got it for jumping off the London Bridge. And that one over there? For jumping back.