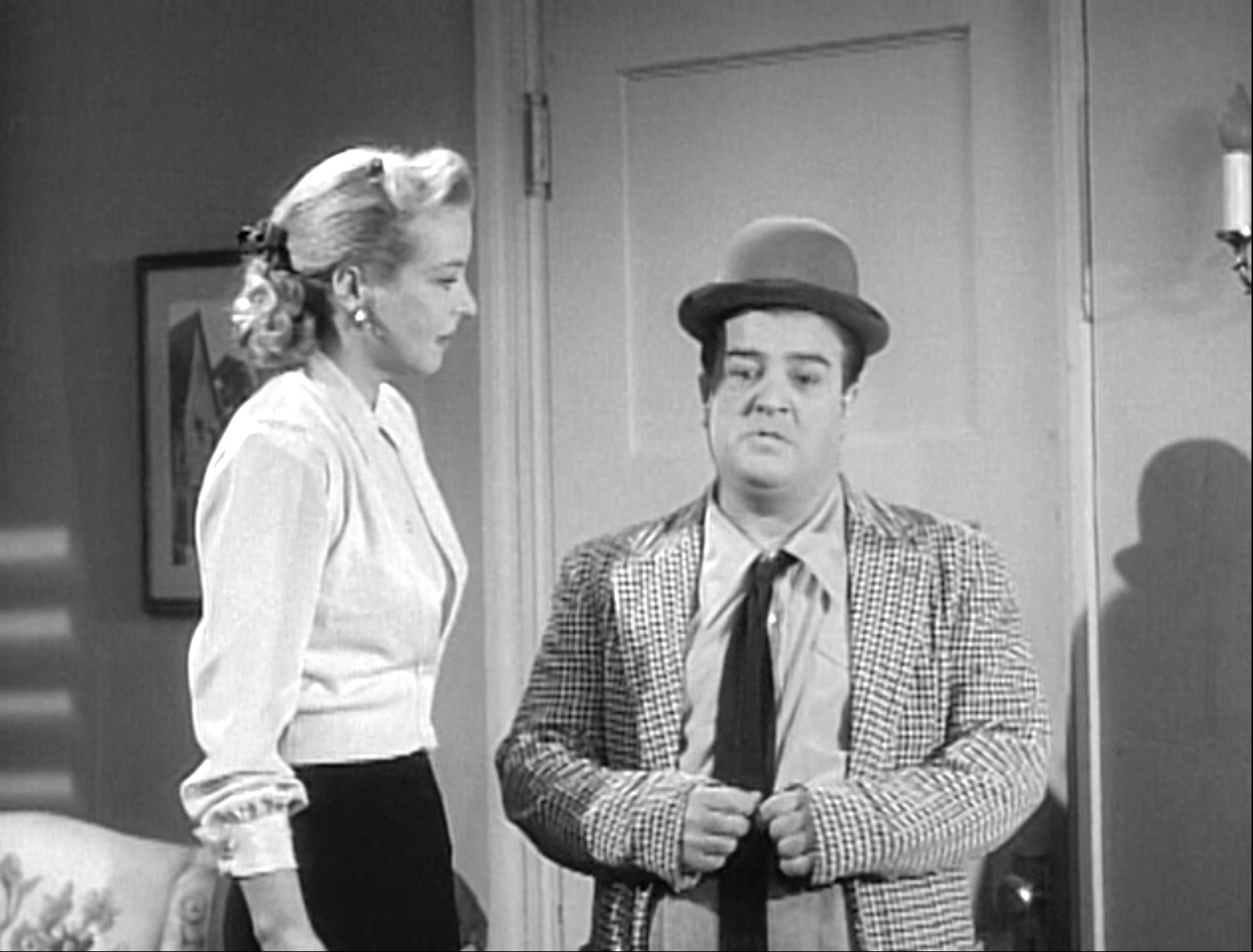 Do my kisses bring tears to your eyes?

Lou goes to Hillary’s apartment, to invite her to the birthday party. Hillary is very sweet, and accepts. In fact, she offer to kiss “Louis” goodbye when it’s time for him to leave. Lou is shy, but eventually accepts. He kisses her, and she’s on the verge of tears. Is she emotional? No! He’s standing on her foot!

Afterward, Bud and Lou go shopping for the things they’ll need for the party. There’s a fair amount of humor packed into a small span of time, as:

Eventually, it’s time to check out. During Lou’s shenanigans, Bud’s been trying to invite a pretty grocery clerk, Phyllis, to the party. For every sweet nothing he says to her, Lou interrupts. For example, “Every time I look at those beautiful eyes of yours, they remind me of two …” “Tomatoes.”

Party game – you can’t punch me in the nose

Bud demonstrates to Lou an idea he has for the party. He bets Lou twenty cents that if he puts a handkerchief on the floor, stands on one side, Lou stands on the other …. Lou can’t punch him in the nose. But …. he puts the handkerchief in the doorway, where the door prevents Lou from hitting Bud!

In the classic “that was terrible — let’s do it to someone else” idea, Lou invites Mr. Fields into the room, and makes the same bargain. But Mr. Fields realizes it’s a double door! He pulls the top half of the door open, punches Lou, and wins the bet!

At the party, Bud offers Mike the Cop a hot dog. He does the “Coney Island hot dog business”. He holds it with his finger inside the bun, as he adds mustard. After he hands it to Mike, he pulls out his finger and wipes it off. Lou watches the whole thing, and emulates it when he offers a hot dog to Mr. Bacciagalupe. Who’s too fast for Lou, and bites his finger!

Lou’s new invention, to keep from being squirted by a pickle when eating it. It’s a small straw, that goes in one end of the pickle. Lou demonstrates, and the juice squirts out …. Soaking Mike the Cop.

Turn off that radio!

Lou has unintentionally offended Mr. Fields, who’s left the party. When Lou plays the radio so Hillary can dance with the male guests, Mr. Fields comes in, and threatens Lou. But Bud insists that Lou play the music! So it’s a recurring joke that Lou turns on the music, Mr. Fields comes in and beats him up — as Bud sits there nonchalantly, and Bud convinces him to turn the music back on!

A bet with Mike the Cop

Finally, Lou makes the statement that nobody can punch him in the nose if he doesn’t want them to. So, he has Mike the Cop do the handkerchief bet. But Mike punches through the door, and hits Lou!