Best of Abbott and Costello volume 1 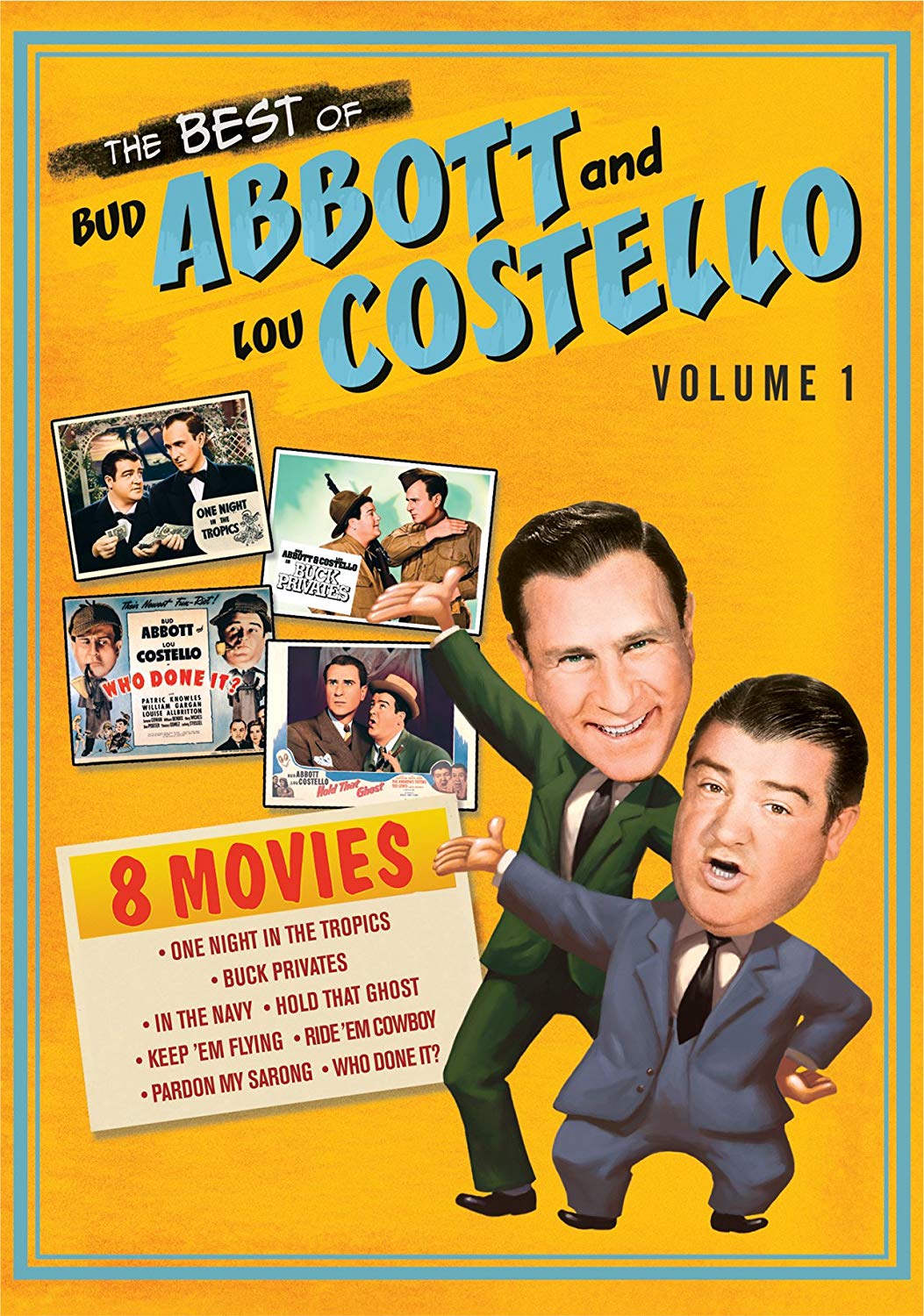 Simply put, The Best of Abbott and Costello volume 1 is a collection of the Abbott and Costello films. All starring Bud Abbott and the con-man straight man, partner to his pal, the comedian Lou Costello.   The DVD includes the 8 films (click the titles for individual reviews) on 4 DVDs:

One Night in the Tropics

One Night in the Tropics is Abbott and Costello’s first movie. It was supposed to be a minor role, but they were so funny they kept expanding their roles. They literally stole the show.

Bud Abbott  and  Lou Costello‘s follow up after the amazing success of  Buck Privates  was  In the Navy. Which actually did better than Buck Privates. Like their previous film, Shemp Howard and the Andrews Sisters provide a comic foil and musical interludes, respectively. In a nutshell, Abbott and Costello join the Navy. There thy get involved in a romantic subplot with Dick Powell, and do some of their most famous routines,. Including a version of the  con artist shell game using lemons. And  Lou demonstrating his clownish math skills by trying to prove that 28 divided by 7 equals 13. This bit alone is worth the price of admission.

Hold that Ghost deals with Bud Abbott and Lou Costello as gas station attendants. They inherit an abandoned roadhouse from a deceased mobster. Bud and Lou go there, accompanied by several other people. But it turns out that the gangster has hidden his wealth there. And several of his old cronies are looking for it. And they’re trying to get rid of Bud, Lou and their new friends by hook or crook – or murder.

Bud Abbott and Lou Costello play two carnival workers who join the Army Air Corps with their barnstorming stunt pilot friend. Abbott and Costello swear off women until a beautiful singer joins the USO. Which begins a very unusual love triangle. Martha Raye plays the part of twin sisters, one shy and demure, and the other outgoing and earthy. This leads to one of their most famous routines, Turkey Sandwich and a Cup of Coffee – hilarious, and one of the high points of the movie.

Bud Abbott and  Lou Costello star as two peanut vendors at a rodeo show. They get in trouble with their boss and hide out on a railroad train, which unexpectedly heads west with them still on it. Upon arriving, they get jobs on a dude ranch. Despite the fact that neither of them knows anything about cowboys, horses, or much else. The scene with Lou Costello attempting to milk a cow is a gem of comedy. Abbott and Costello follow the same formula here as in their previous films, with a romantic subplot and music, provided by  Ella Fitzgerald.

Abbott & Costello travel to the South Seas. Screwball bus drivers Algy (Abbott) and Wellington (Costello) get shipwrecke an uncharted island, inhabited by innocent natives and a sinister Dr. Varnoff (Lionel Atwill). Mistaken for a legendary god, Wellington is betrothed to a beautiful native girl (Nan Wynn), in the hilarious “Tree of Truth” scene. Chosen to appease an angry volcano god, Wellington learns the volcano has been rigged by Varnoff and his men who plan to collect the gullible natives’ sacred jewel.

In this comedy thriller,  Bud Abbott and  Lou Costello play would-be radio writers who find themselves involved in a real murder during the recording of a “whodunit” play. Trying to solve the crime,  they are suspected by the police-and targeted by the killer!

Editorial Review of  The Best of  Abbott and Costello  volume 1, courtesy of Amazon.com

Get ready for big laughs with Abbott and Costello, undeniably the most popular comedy team of all time, in this hilarious collection featuring eight of their classic films. The wildly popular comic duo has entertained audiences since 1931, conquering vaudeville, radio and the silver screen in nearly 40 films. Enjoy side-splitting hits like Buck Privates and Hold That Ghost in this collection of eight full-length features. The Best of Bud Abbott and Lou Costello: Volume 1 will have you laughing out loud again and again!