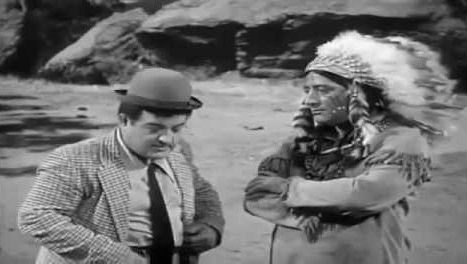 Synopsis of The Western Story

In The Western Story, Hillary Brooke inherits a dude ranch from her uncle, and Bud and Lou visit, and tangle with outlaws.

Details of The Western Story

Lou buys Hillary Brooke a “musical trash can” as a present.  When Bud asks why, Lou responds, “Do you think we’d have gotten a laugh with a normal one?”  Soon Hillary reveals that she’s going to visit her uncle’s dude ranch that she’s just inherited, and invites the boys to visit.

They get lost on the way and ask a stern-looking Indian (now Native American) for directions.  Lou uses “Indian hand signals” to attempt to communicate, only for the Indian to ask in normal English what he’s talking about.  The Indian and his wife take Bud and Lou to the BeBop Ranch, where a ranch hand is singing.

Soon, Bud and Lou change into their western duds and do their classic “herd of cows” routine.  Immediately after, Lou tries to milk the cow – a funny, extended routine.  The Sheriff arrives (Sid Fields) forming a posse to find some cattle thieves.  They meet at the Red Dog Saloon, once Lou actually makes it on a real horse.  The meet at the saloon and Bud and Lou play with the “horn” on the saddle.

Lou goes into the saloon to meet with the chief of the rustlers, Black Bart.  Lou confronts him, only to realize that he’s alone, and backs off.  The trio goes to the bar and tries to order a drink.  The Sheriff plans to arrest Black Bart, and Lou demonstrates his “shooting skills”.  He hits two of Black Bart’s men with a single bullet by pure luck and squirts him in the face with a water pistol.  Again by pure luck, Lou shoots down the lights and captures Black Bart and his gang.  The people show their thanks by “accidentally”  hitting his head as they carry him out on their shoulders.  After a moment of slapstick with Bud and a kiss from Hillary, the episode ends.

Lou: Well, so long Abbott.  I have to go hang up my horse.
Bud: Hang up your horse?
Lou: Sure! He’s a mustang – I “must hang” him somewhere!