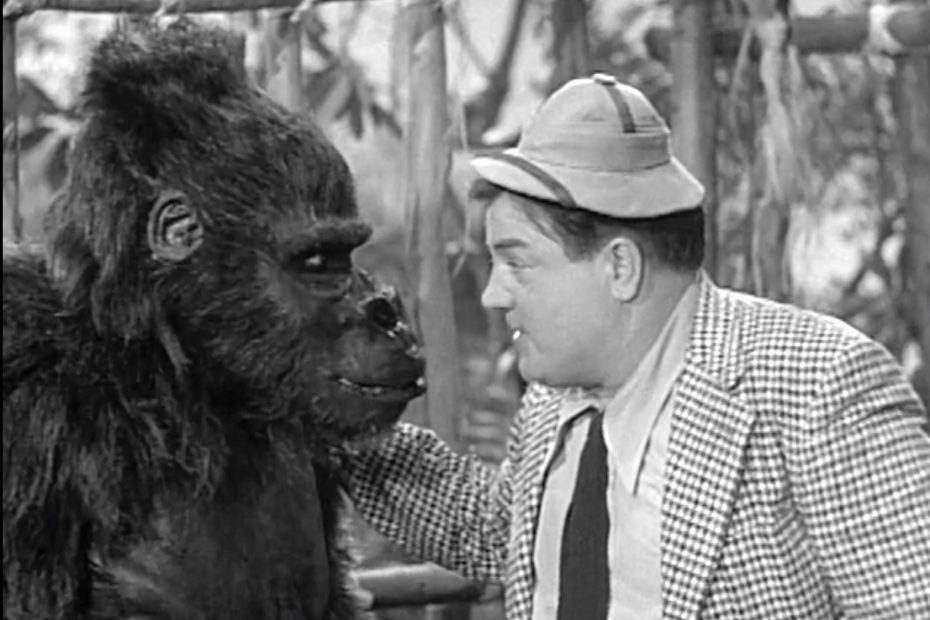 Safari – Bingo is sick in bed with a 172 degree temperature. Lou figures that he misses his family, so the entire gang heads to the Belgian Congo to find Bingo’s father. Lou tangles with a real gorilla, thinking it’s Bud in a monkey suit.

With Bingo being sick, Lou brings the entire group to the Belgian Congo, to look for Bingo’s father? How do they afford this? Nobody knows. Why does Mike the Cop, Mr. Bacciagalupe, etc. tag along? Solely for the comedy of it, of course.

Bud sends Lou inside the tent to wash up. And Lou unintentionally tosses the water into Mr. Bacciagalupe’s face. Then, Lou accidentally shoots Mike in the rear with a gun! Next, Lou gets lost in the jungle, and …. Runs into someone selling newspapers! Then, he hears someone fallen into a pit, and Lou rescues … Bingo’s father! Then, there’s what I call a Snuffleupagus moment, when Lou sees the gorilla, and gets increasingly frightened, while Bud and Hillary don’t see anything.

Everyone in the camp thinks Lou is a coward. So Bud has a plan. He’ll dress up in a gorilla costume, and Lou can “bravely” stand up to him in front of everyone. Except, of course, while Bud’s putting on he costume, the real gorilla comes by, and Bud faints! Not knowing better, Lou stands up to the real gorilla, putting it in a cage. And going inside it with him!

Bud wrongly thinks his friend Lou has been killed, and he’s very regretful and sorrowful. He’s openly crying, and repentant over how he’s treated his best friend.Lou watches, and joins “Buddy Abbott” in weeping over his own “death”. Finally, Lou tells Bud that he’s alright. At which point Bud first checks that he’s okay. Not a mirage? No broken bones? And then he hits him! How dare Lou get him all worked up?

Lou Costello: What are you doing all the way out here in the jungle, selling the Los Angeles Gazette?
Bobby: Can I help it if they gave me a lousy corner?