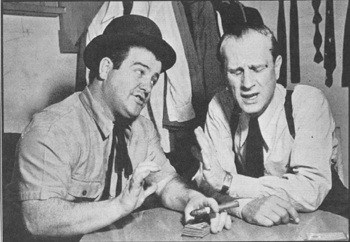 With Fred Allen leaving the air this week. * Ipana-Sal Hepatica decided to cut its NBC Red network time from an hour to a half hour (still starting at 9 o’clock EDT Wednesdays) and two months ago began looking for breezy talent to fill the breach for the summer. What they got was a popular pair of wacky vaudevillians, Bud Abbott and Lou Costello.

Abbott and Costello were launched on the air waves two and a half years ago in a ten-minute one-shot guest appearance with Kate Smith, after Ted Collins, radio impresario, saw their act at Loew’s State Theater in New York and signed them. Their low-brow brand of humor - with the hard-boiled Abbott administering verbal beatings to the meek Costello - caught on, and they were invited to stick around. Since then they have appeared regularly with Kate Smith, keeping up their vaudeville appearances, producing laughs in “The Streets of Paris” both on Broadway and at the New York World’s Fair, and spending their time between performances in a perpetual rummy game - at a dollar a hand.

Born Louis Francis Cristillo at Paterson, N.J., in 1908, Lou Costello left high school in his junior year for Hollywood. There, the chunky, moon-faced comedian became a stunt man and acted as tackling dummy for the entire U.C.L.A. football team in one picture. Fired during a shake-up, he started East but landed in vaudeville at St. Joseph, Mo.

In 1929, while he was playing in Brooklyn, his path crossed that of Abbott, an ex-lion tamer turned theater cashier. Costello’s straight man was ill, and the tall, lean Abbott filled in so well that they teamed up permanently. Abbott, now 39, lives in Stony Brook, Long Island, with his wife and a menagerie of five dogs; Costello has returned to Paterson with his wife and two daughters, the younger of whom (16 months old) worries him by repeating: “Ye gods!”

With the Kate Smith show left behind and a half hour all their own beginning next week, Abbott and Costello plan great things. But for aid they will depend heavily on such veteran performers as Harry von Zell, announcer, Benay Venuta, songstress, and Peter Van Steeden, orchestra leader. In addition, each week they will interview - and rib - geniuses who have invented little-known but complicated contrivances. The first such gadgeteer will be Alexander Rose, who has invented a musical typewriter that may be played like a piano by anyone who can type. Copying certain sequences of letters on this remarkable machine produces tunes. Thus “the quick brown fox” might be the opening bars of “The Beer Barrel Polka.”