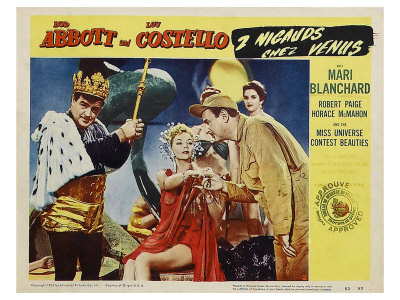 Abbott and Costello Go to Mars is not one of the better-known Abbott and Costello movies, which is too bad.   It’s more of a children’s film, similar to Jack and the Beanstalk – but with some “eye candy” for the adults as well.   The basic premise is that Orville (Lou Costello) is the oldest orphan at an orphanage, who is assigned to help Lester (Bud Abbott) load equipment onto an experimental spaceship.   Predictably enough, they accidentally launch into space; unpredictably enough, they land back on Earth in New Orleans, and mistake the annual Mardi Gras parade for an alien civilization on Mars.  They actually spend a fair amount of time interacting with the “aliens” at Mardi Gras, with the expected frightened reactions as the costumed revelers rotate their “heads,” etc.